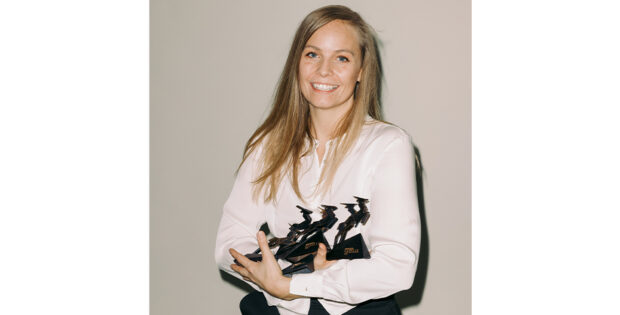 The E-Commerce company Sinful has just received its seventh Gazelle Award in a row. Leading it is a young businesswoman- Mathilde Mackowski – who, against all odds, has created a huge company with explosive growth.

She is at the head of Northern Europe’s largest e-commerce company for sex toys, but this is hardly the future she had imagined for herself. Mathilde Mackowski is slightly dyslexic and school was never her top priority. “I’ve never enjoyed learning by reading, and that’s why I was always challenged by school. It was not a method of learning that suited me at all. I have a strong mom with a great understanding of people. She taught me to work hard,” says Mathilde Mackowski, co-founder of Sinful. However, Mathilde Mackowski has always known that she was capable of creating something great. She had an intense need to show the world that she could succeed. At first she did not know how, but that changed quickly. “My insecurity has been a huge help in the pursuit of success. For me, it’s never been an option to go for the mediocre,” says Mathilde Mackowski.

In 2008, Mathilde Mackowski started Sinful together with her then boyfriend, Tonny Corydon Andersen, whom she had met two years before. They quickly discovered they had an insanely great dynamic that led them to develop products ranging from bicycle helmets to toothbrushes. Everything could be done better, more beautifully and more user-friendly. “We had the same talk about sex toys because we used them ourselves. We bought the products in stores and online, but we never felt that we were taken seriously. The packages didn’t arrive on time and the products fell apart because of their poor quality. So we thought: why is no one doing this better?” says Mathilde Mackowski. And so Sinful was born. Four years later, Mathilde and Tonny broke up as a couple but stayed together professionally, building an even stronger partnership. Today, this is one of the company’s greatest assets.

As the sole female business owner, Mathilde Mackowski, along with the rest of the Sinful team, has received the Børsen Gazelle Award for the seventh year in a row. “It was a big milestone when we received our first Gazelle Award. Now we have the seventh in a row, and it’s difficult to find words for exactly how wild it is. Tonny and I have created everything from scratch. We have never had a stronger team than now, and we’re very proud of that,” says Mathilde Mackowski. Earlier this year, the partner duo chose to enter into a collaboration with the Nordic private equity company, Polaris, which bought 57.5 percent of Sinful and became co-owners of the company. “Now it’s about pushing the accelerator even more and looking towards more European expansion – and then we’re ready to make sex toys mainstream in even more markets,” says Mathilde Mackowski, who has a lot of faith in the future.

The Gazelle Award is awarded to companies that have had positive growth and a doubled revenue over a period of four financial years. The company must have a revenue of at least £113,000 or a gross profit of at least £56,500. In 2020, Sinful grew by 38 percent, had sales of more than £34 million and shipped almost 800,000 packages to customers across Northern Europe. Sinful is the first company in its industry to receive the coveted Børsen Gazelle Award.