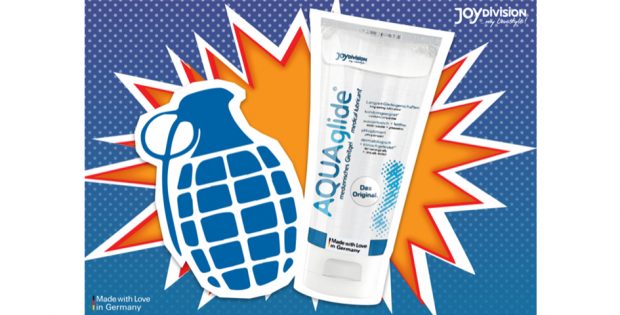 According to a report in the BILD newspaper of 27.04.2021, a sex toy and an empty tube of AQUAglide have caused quite a stir in the district of Passau. A female jogger discovered a transparent bag with grenade-like contents and reported this find to the police. As a result, a special squad had to arrive for the ‘disposal of dangerous explosives’. This incident attracted such immense worldwide attention that even Russian television reported on it.

Regardless of the unnecessary use of the explosives squad, JOYDIVISION was once again confronted with the sensitive issue of illegal waste disposal and used this incident as an opportunity to offer a reward of 1000 € for relevant information leading to the apprehension of the environmental offender.

The JOYDIVISION CEO, Oliver Redschlag, has been particularly concerned about this issue for a long time: “We want to send a signal that it is simply not appropriate to dispose of rubbish in nature! Everyone knows the sight of littered motorway exits or car parks of fast food restaurants and I have always wanted to personally campaign for illegal littering to be punished with a fine of at least €500. Because only when people experience real consequences for their actions will there be a change.”

For JOYDIVISION, sustainable action and voluntary commitment to climate protection have long been a matter of course. CO2 emissions from the production of lubricants cannot be completely avoided, but JOYDIVISION ensures that the carbon dioxide emissions released are offset by high-quality CO2 climate protection projects. And JOYDIVISION would like all the more to avoid incidents like the one that happened in the district of Passau in the future