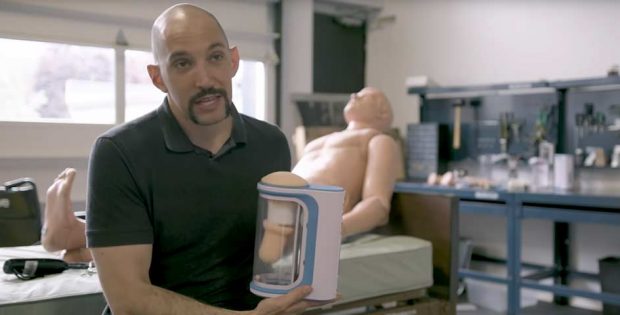 After almost a year of crowdfunding pre-sales, Autoblow A.I., the first device that uses artificial intelligence to replicate human sexual acts, is available to the public on Autoblow.com. A global funding effort by more than 5500 men in 64 countries raised $755,000 to aid in its creation, breaking the previous male sex toy crowdfunding record (for the Autoblow 2) by more than $350,000.

The Autoblow A.I. uses a microcontroller in combination with an I.R. beam sensor and magnetic field sensors to control a gripper that manipulates a silicone sleeve between any of 250 different points along a 5-inch-long stroking plane to deliver a variety of human-like movements to the user’s penis. This cartoon explains how the Autoblow works.

Tags:Masturbators, Technology
Back to Front Page