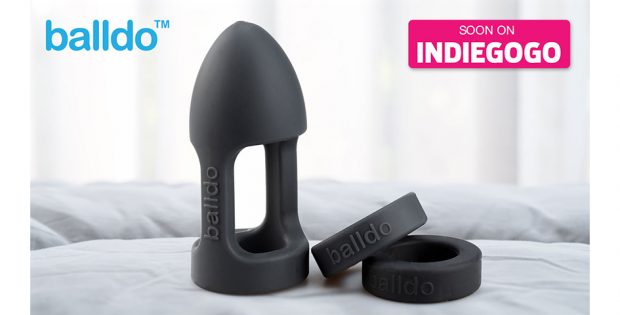 Nadgerz Inc, the designers of the Balldo have reported that their crowdfunding campaign was a massive success achieving 5 times their expected crowdfunding goal.

“Molds have been opened and we expect to have product in consumers hands in mid to late May,” says Jerry Davies, Balldo’s founder. “We have opted for a simple and 100% recyclable tri-fold clamshell packaging that can free stand or hang and clearly displays the product – which is critical for a product requiring a significant degree of education in order for the customer to understand what it is, how to put it on and how to use it.”

Since launch at ANME/XBIZ in January, Balldo and Chuck its talking cartoon balls mascot have attained a huge cult following featuring heavily on podcasts, morning shows and humor websites.

“Whilst this was never our intention to get a cult following, it’s clear the world is excited about the balldo and ballsex one way or another! – Its publicity, so when these are on the shelf, people will recognize the brand name which has to be good for us in the long run.”

“The first units are making their way out to influencers and performers and we hope to have the first packaged units out to buyers in May.”

“We have also opened our first adult site www.ballgasm.com Here we will detail how the balldo should be worn and when the first ballsex / balldo clips start coming in – we will link to them or potentially host them from here.”

“Our crowdfunding platform www.balldo.com is still open and is just charging MSRP equivalent (when shipping cost is factored in) – so customers and party planners can still order direct and stores who want to order tester packs of 3 or 10 can still get a good deal to test the water before buying off a distributor when these channels come online.”

“Once we have finalized distributor pricing, we’ll be locking in those relationships shortly,” says Davies.

Tags:Balldo
Back to Front Page