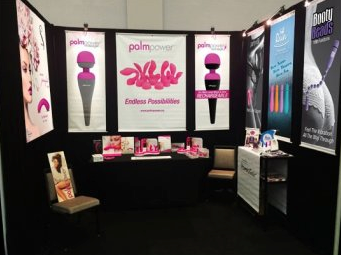 Over this past weekend at ANME, BMS Factory amazed visitors with exciting new products and additions to their already award-winning collections. The best-selling PalmPower – a show favourite by many who visit ANME, and the new PalmPower Recharge were on display. The PalmPower Recharge is a fully USB rechargeable version of the Original PalmPower that still achieves incredible power and has a darker accent finish. Adding more possibilities, the PalmPower Collection has further expanded its value to customers with the addition of 5 new attachments. Available separately and compatible with both the Original PalmPower and PalmPower Recharge, these new attachments consist of the Palm Embrace, Palm Bliss, a 2-pack of replacement Palm Caps, and a dual pack called Palm Pleasure which offers a variation on the Leaf Vitality called the Palm Delight and a triple stimulator called the Palm Tease. The new attachments received a lot of excitement from the moment they were shown to visitors, especially the Palm Tease which creates an intense triple stimulation sensation intended for the clitoris but can essentially be used almost anywhere the user wants like the rest of the attachments. These attachments are now ready and shipping.

Rain, the hot new item from the PowerBullet family is set to expand its offerings with Soft Rain and was shown for the first time this past weekend. Available in 4 beautiful colours, Soft Rain features PowerBullet’s beloved Breeze finish which is silky smooth and soft. For those who already have a Rain display, Soft Rain has a standalone display which can also be inserted into the centre compartment of the original Rain display.

Also, 2 new versions of Booty Beads were introduced with functions which include 3 speeds and 4 vibration patterns. Available in the standard size and Mega size, Booty Beads with Functions will be offered in 2 new colours – dark grey and royal purple.

A crowd favourite, the Swan Wand with its deep rumbling vibrations was also on display. With all of the excitement surrounding the Swan Wand, a new more compact version of the Swan Wand was shown. On track to be released this October, the Mini Swan Wand is also waterproof, finished with the same soft 100% silicone and is USB rechargeable like its larger version, and has a single intense vibration at the large tip with incremental speed control.