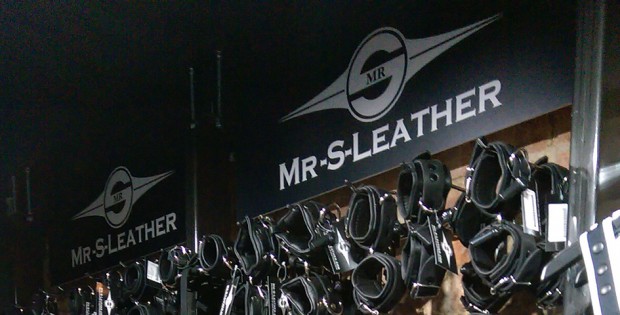 Clonezone announced a new partnership. Arriving this month online and in the fetish basement of Clonezone’s Earls Court branch is a huge array of leather, neoprene, bondage gear, as well as much more from the gay fetish brand Mr. S Leather.

Whilst Mr. S have really grown and forged their reputation in San Francisco, their beginnings are actually very similar to that of Clonezone. Alan Selby, the original Mr. S and the man who would later come to be known as the unofficial “Mayor of Folsom Street”, was in fact a Yorkshireman. After a transformative trip to the US, Selby returned to England and founded Mr. S Leather, selling his handmade leather from the back of his car boot to London’s ‘Leather Clones’. A factory and shop would soon follow, before Selby and his partner made the permanent move to San Francisco in 1979.

It would be just 3 years later that the founding members of Clonezone would begin selling toys, lube and all manner of naughty treats out of a wheelbarrow. Pushing their sexy wares around Earls Court – then the heart of London’s gay scene – the name Clonezone was taken from the same ‘Leather Clones’ that formed Mr S.’ original customer base. Since those early days, both companies have grown and diversified. In 1991, “Daddy” Alan Selby sold his company to Richard Hunter. Retaining the iconic name, Mr. S have added to their famous leather designs with ranges of bondage, neoprene, rubber, sports and pup gear, catering expertly to the ever shifting and hugely diverse gay fetish scene.

Clonezone’s Head Buyer Mark Lawrence is excited to be involved in bringing Mr. S Leather back to its London roots; “London has a thriving fetish community and deserves a brand as big as Mr. S. Speaking to guys on the scene it became obvious that Mr. S really are the most respected guys in the business, and visiting them in San Francisco and seeing how much passion and care goes into all the gear they make only cemented that impression for me. Bringing Mr. S back to London, where it all began for them, is I think pretty special. Clonezone Earls Court store will soon be home to the biggest range of Mr S. Leather in Europe and that’s something we are very proud of.” Jonathan Schroder, General Manger of Mr. S agreed, “Mr. S Leather now having a London presence is pretty magical considering our roots; and the current version of the company will attract a wide demographic.”