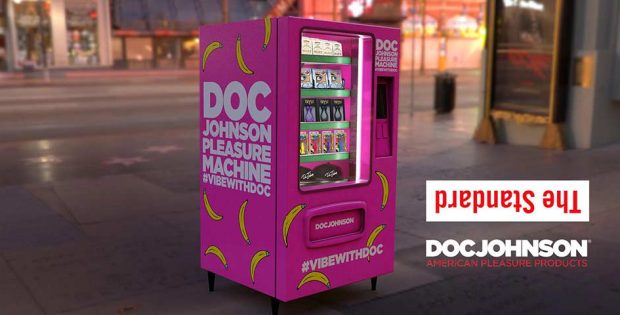 Doc Johnson’s products are showing up in the most unexpected places and events, thanks to their new ‘Pop Up Pleasure Machine’. The technicolor traveling sex toy vending machine, designed by Doc Johnson as an Instagram-worthy pop-art installation, has been making its way across Los Angeles since its first debut at Whitney Bell’s sold-out art pop-up in October, which was recently featured in The New York Times.

For select dates in January, February, and March 2018, the Pop Up Pleasure Machine will appear at The Standard, Downtown LA as part of the hotel’s new monthly special event series, “Pillow Talk.” The event series is designed to educate and empower a diverse crowd of millennials and media influencers with topics relating to sex, the zeitgeist, and pop culture.

“The Doc Johnson vending machine brings together sexuality, convenience, and style, which work perfectly with the ethos and reputation of The Standard hotels,” said Gregory Alexander, Area Director, Nightlife and Culture, The Standard. “The Standard has never shied away from sex positivity and are very excited to be partnering with the family owned and locally produced Doc Johnson company in presenting the new Pillow Talk series with host Fiona Duncan.”

Doc Johnson’s Erica Braverman added, “Our Pop Up Pleasure Machine is essentially a conversation starter– much like an art installation. Doc Johnson has always been about finding the balance between playful and provocative when it comes to sexuality, and the machine captures this perfectly. As Doc Johnson collaborates with tastemaker brands such as The Standard, it’s clear that our Pop Up Pleasure Machine is a growing success with increasing potential– not just for the brands involved, but for the individuals discovering this new world of sex-positive possibilities.”