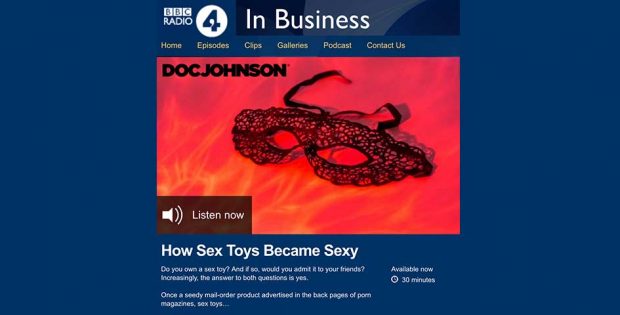 Knight’s interview with Chad and Erica focuses on the business of sex toys, and how it has become the multi-billion dollar industry it is today. The segment aired live on Thursday 9/6 and Sunday 9/9 at 8:30 pm PST.

You can listen to the full interview on BBC iPlayer (with Doc Johnson featured starting at 7:09 minutes into the recording). The BBC also posted an accompanying article to go along with the segment, entitled “Nine Facts That Shed Light on the Big Business of Sex Toys.”

Chad Braverman said of the BBC Radio segment, “To be called upon by one of the most-respected news organizations in the world was an honor for Doc Johnson— and being able to share some of our story on international radio was also very exciting. It’s always incredibly gratifying when a mainstream news publication is interested in covering our industry, but to be featured on an outlet that is as esteemed as the BBC was particularly special. We’d like to give a huge thanks to the BBC and Laurence Knight, for allowing us to share our thoughts on the pleasure products industry with their international audience.”