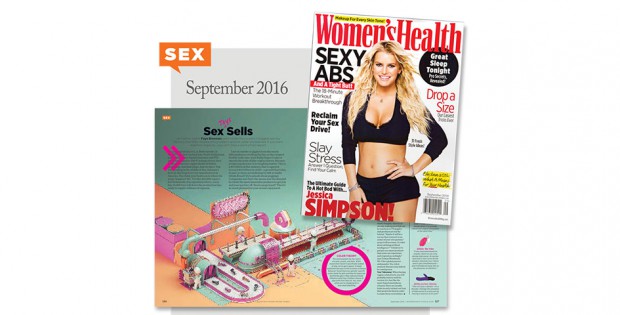 Doc Johnson was recently profiled for a feature article, entitled “Sex (Toys) Sells”, in this month’s issue of Women’s Health, which hit newsstands this week. The article takes Women’s Health senior editor Faye Brennan on a tour “inside the country’s biggest sex toy factory (the Willy Wonka of big willies!)”, where she describes the Doc Johnson campus as a “215,000-square-foot behemoth of an operation where, every day, 15,000 toys roll down the production line, ready to supply millions of orgasms.”

Through comments made by Doc Johnson COO/CCO Chad Braverman, the Women’s Health article also offers Doc Johnson’s insights on current trends and predictions for the future of the pleasure products industry.

“It’s exciting to receive coverage from a publication as visible and influential as Women’s Health,” said Braverman. “As a company that has kept most manufacturing in the U.S. since 1976– unlike a lot of others that only began exploring better practices a few years ago, when labor outsourcing became a hot-button issue– we are also very proud of the fact that Women’s Health chose Doc Johnson to represent the face of American pleasure products manufacturing. It’s a constant goal of ours to introduce our brand to the mainstream masses, and gaining this level of media exposure, in a publication that attracts millions of readers, is a home run for us.”