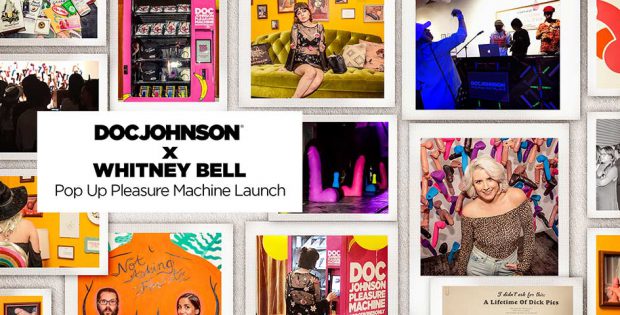 On October 6th, Doc Johnson teamed up with artist Whitney Bell to unveil its new traveling sex toy vending machine, the Pop Up Pleasure Machine, to a crowd of influencers at an immersive art exhibit in Los Angeles.

The exhibition, entitled, “I Didn’t Ask for This: A Lifetime of Dick Pics, presented a serious message in a playful way at Friday night’s sold-out opening party at the  Think Tank Gallery in Downtown Los Angeles, and featured a host of Doc Johnson experiential areas throughout the multi-room gallery.

“The Pop Up Pleasure Machine campaign is about making the Doc Johnson brand idea come to life,” said Doc Johnson COO/CCO Chad Braverman. “It’s a great platform for us to take certain topics or aspects that you wouldn’t necessarily expect from a sex toy brand or the sex toy category and engage with a broader audience. It’s part of our brand’s DNA to engage people and surprise them with new ideas and introductions, but as we move forward and consumers change, we need to win in a social environment. It’s about entertainment and creating content that gets people talking.”

Doc Johnson Marketing Executive Erica Braverman said, “At our first event for the Pop Up Pleasure Machine, we saw crowds of people lining up back to back all night, taking up multiple rooms at certain points, to take photos in front of our American POP! and Realistic Cock dildos. That definitely makes a statement about how far we’ve come in terms of shifting consumer attitudes towards sex toys, with younger people leading the charge, and this speaks towards our recent forays into more mainstream-oriented marketing. We were so, so thrilled with the early response to the Pop Up Pleasure Machine at the event, and can’t wait for more people to experience it in their own cities.”

The Pop Up Pleasure Machine will continue its multi-city tour over the next few months with several surprise locations to be announced on Doc Johnson’s social media channels and via press releases.

Tags:Doc Johnson
Back to Front Page