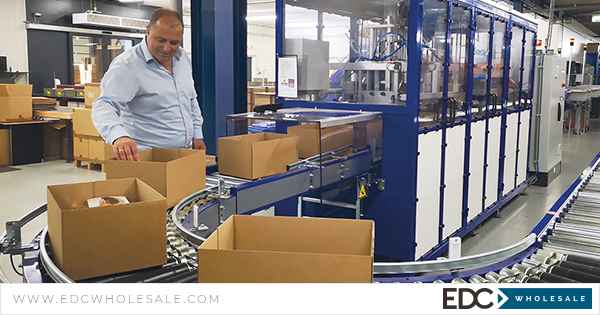 To be prepared for further growth, EDC Wholesale, is investing almost 4 million euros in expansion. With the construction of two new halls totaling more than 3000 square meters and the arrival of an extra packing machine, the storage space will be increased significantly, and the production capacity will be doubled. The extension will employ dozens of employees.

In addition, the current corona period has provided the company with important insights. Due to initial supply problems from China and the boom in orders, the crisis was a logistical challenge. At times there was a sales growth of 162 percent. EDC had to make every effort to process the orders.

“Corona has taught us how important it is to anticipate changes in the market and to have the ability to build up a larger inventory. We want to be prepared for a possible second wave. In this way we are also less dependent on any problems with suppliers,” explains Idema.

Finally, EDC wants to respond better to seasonal peaks. “We see sales increase around the Christmas period. The sales are usually already increasing around the eroFame Trade Convention in October and continues to increase in November before Black Friday. The Advent calendar, a surprise box with, among other things, all kinds of toys, is a seasonal product and requires a lot of space.”

The expansion is expected to employ some thirty to forty employees. They will work in the new halls that are built in the most sustainable way possible. Ultimately, the halls must be self-sufficient and generate as much energy as they consume. Solar panels are placed on the roof for this purpose. Due to the insulation, heating in the hall is not expected to be necessary.