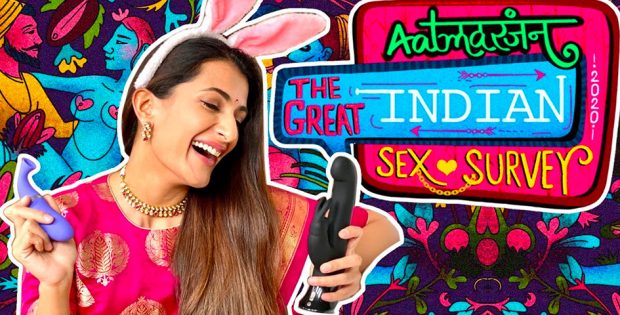 The country’s top sex-positive content creator Leeza Mangaldas was tasked to analyze the results, and what emerged is a delightful video that manages to convey important data and truth bombs about sex with a sense of playfulness and humor embeded in the Indian cultural context.

While it is near impossible to make generalizations about such a large and diverse nation, one thing becomes clear: Indians are far more curious and open minded than they can publicly give themselves credit for.

In a country where sex education is non existent and gendered violence is rampant, this project raises the important question that as a society, isn’t it time we become comfortable contending with sex and sexuality as a normal and positive part of life, with a focus on consent, safety, and pleasure, instead of one to be hidden, laden in shame and fear?

Here are some of the most memorable findings from the survey:

-We have sex on our minds a lot! 95% of respondents said they THINK of sex at least once every day! But we’re not getting it nearly as often as we think about it. 60% of participants stated that they have sex less than thrice a month.

-The orgasm gap is very real. 70% of male respondents said they orgasm every time they have sex, while only 30% of female respondents were able to say the same. Most women also said they’ve faked orgasm at least once.

-The good news is, though, that 64% of respondents said their partner’s pleasure is a primary concern for them during sex–so let’s get comfortable figuring out how our pleasure works–and then let’s communicate that knowledge to our partners! Here’s a helpful hint for all genders: sex isn’t just about penetration. And if you or your partner have a vulva, it is well worth your while to figure out the clitoris.

-We’re also using technology to help enable out sex lives. About a quarter of respondents said they’d met their current partner online, and over two thirds had sent nude photos of themselves at least once, sometimes even to people they weren’t in relationships with.

ABOUT THE SURVEY SAMPLE AND METHODOLOGY:

The survey was conducted online and was open to the public. It consisted of questions with multiple choice answers, as well as a comment box, in case people wanted to specify or get into more detail with their answers. Some of the most interesting insights, of course, arrived in these boxes.

Over 2000 people participated. Only 12% of respondents were from IMBesharam’s customer base–the rest were active netizens who wished to contribute to a conversation on sex in India by sparing twenty minutes of their time to fill in the survey on IndiaSexSurvey.com.

67% of the respondents were male, 30% were female, and only around 1% each identified as non-binary or transgender. Remember, this sample sort of created itself– anyone could participate in the survey. But evidently men were the most likely to. That itself says something about the fact that the cis-hetero-male perspective tends to dominate the portrayal of sex and sexuality in our country, with straight men having far more freedom to express themselves without fear of judgement, shame, or consequences than anyone esle.

We hope in the coming years those gender stats will look more balanced. In India, and indeed, all over the world, women, trans and non-binary folks, and people from the queer community expressing their own identities and seeking autonomy over their bodies, sexualites, and pleasure, sadly remains a major taboo, and we need to help change that NOW.

Just like the rest of the world and throughout the history of humanity, even though we like to pretend otherwise, the fact is that we Indians too, are having causal sex, and are exploring non-monogamy. There are Indians who refuse to label their relationships. And more power to them. It’s worth acknowledging that our cultural fixation with marriage isn’t for everyone.

There were participants from virtually every part of the country- not just the big cities, smaller places too. There were lots of participants from Mumbai, Delhi, Bangalore, Chennai, Kolata, Hyderabad etcetera–but there were also participants from Srinagar and Mohali to Allapuzha and Hubballi, from Ajmer to Aizawl–and everywhere in between. It’s high time we acknowledge that sex is not a western import restricted to a few big cities. Indians are curious about sex literally nationwide, and always have been.

If you want to know more, you have to wait till Sep 14, 2020. A detailed version of this survey with all the stats will be available on IndianSexSurvey.com by then.

Tags:India
Back to Front Page