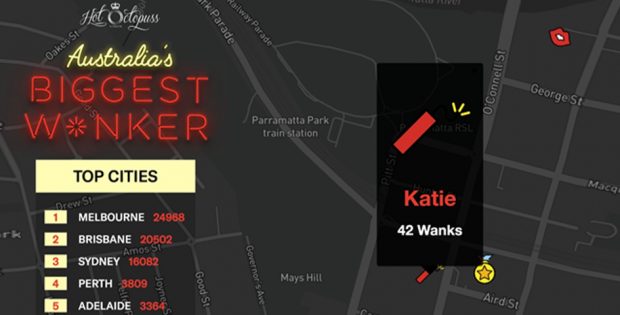 Supported by high-profile comedian Alex Williamson whose videos accrued more than 200,000 views, as well as featuring repeat cameos by Australia’s Prime Minister, Scott Morrison (who proved he’s a busy man by popping up in multiple places across the country at once), participants accrued points for each time they registered their special moment. While many may have thought Canberra would take out first place, Melbourne came out on top with 24,961 w*nks. Brisbane was a close second with 20,502 and Sydney surprisingly lagged behind at 16,082 proving that The Emerald City isn’t as full of as many w*nkers as we all might have thought.

There are so many pros to regular orgasm like its antidepressant and immune-boosting — not to mention it can drastically reduce the chances for men of developing Prostate Cancer-later in life,” says Manifest Melbourne’s Co-Founder and Managing Director Isabel Thomson-Officer.

She continues: “Sadly, the shame surrounding it means its beneficial qualities often get overshadowed. It’s empowering to see so many Australians get behind One Big W*nk and Hot Octopuss’ war on stigma in our first official campaign for the brand in the region.”

Tags:Australia, Promotion
Back to Front Page