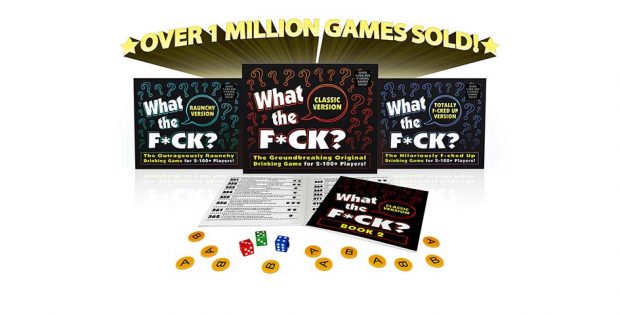 Kheper Games announced that it’s line of What the F*ck? party games has just hit their millionth game sold. The original What the F*ck? game was first launched in 2003 and asks players to answer questions such as “What would you find more annoying? a) listening to Christmas carolers sing Jingle Bells all day or b) a phone that never stops ringing.” Game play is simple. You ask someone a question and the other players use A/B coins to vote on what they think the player will answer. If you’re incorrect, you take a one, two or three drinking penalty depending on the outrageousness of the question. What the F*ck? was such a big hit, that it quickly spawned off two additional versions of the same game play style. What The F*ck? Raunchy Version and What the F*ck? Totally F*cked Up Version.

“We are f*cking thrilled to have hit our millionth f*cking game sold!” Explains CEO Brian Pellham. “1,000,000 f*cking thank yous to our wonderful customers and f*cking fans who have made this achievement f*cking possible!” All What the F*ck? games will now ship out with a sticker announcing “1,000,000 F*cking Games Sold”.