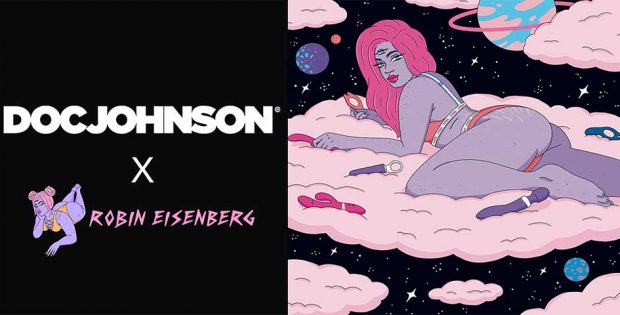 Known for her graphic, technicolor style, Robin created a visual depicting a galactic woman lying in bed with a handful of iVibe Select vibrators scattered around her, including the brands latest addition, the iVibe Select iRing – which is slated to release later this year. Designed for couples play, the iRing c-ring features 10 vibration patterns and is angled to maintain direct clitoral contact during use.

The illustration was unveiled at the Summer 2019 ANME Founders Show. Robin’s post of the design can be found at https://www.instagram.com/p/Bz0h_GvhxYN/

Some of Robin Eisenberg’s other works include collaborations with Thrasher and Vans, as well as the newly released With You track by Meghan Trainor and Kaskade; her illustrations were used throughout the entire music video.

Doc Johnson COO, Chad Braverman said, “It was an absolute delight working with Robin, she truly captured exactly what it was we were looking for and exceeded any of our expectations. It was a really fun way to showcase our iVibe Select line, we hope to work with Robin again in the very near future!”