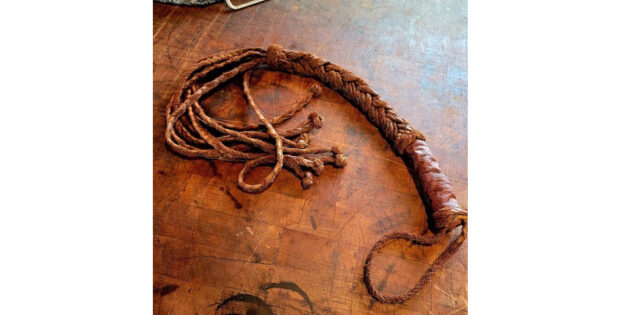 Well established Justin Sayne Leathers was recently tapped to create unique and distinctive props for Disney’s production of the FX series, ‘Kindred.’ Referred by a colleague working with the production team, Justin was asked to send images of his extraordinary crocodile whips, before the company identified themselves as FX, which is now owned by Disney. “They called me and wanted to see my work and I’ve never turned in a selection quite like that before!” Justin shared. “After talking to them for an hour, I had an assignment for three pieces. After they got the crocodile whips and leather cat o’ nine tails and loved them so much, I immediately received requests for more.”For production of the series, which is an adaptation of the book ‘Kindred,’ Justin shared, “They were happy that they could get my custom-made pieces so easily since I make everything domestically and they didn’t run into supply chain issues. I am sure I’ll be making many more pieces for them and am really proud of working with such an established production company such as Disney’s FX.” Justin Sayne Leathers, based in Arizona, has been in business since 2010. For more information, follow him on Instagram at @JustinSayneLeather