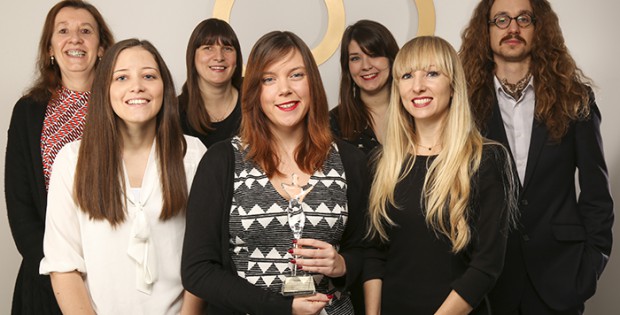 The votes are in and it’s official, Lovehoney is on top for undies according to the British public.

The company was this week crowned the UK’s Favourite Lingerie Retailer at the UK Lingerie Awards, despite being predominantly known for sex toys.

Lovehoney beat off stiff competition from the likes of Agent Provocateur, Debenhams, Tallulah Lingerie and Victoria’s Secret, and more than 4000 votes were cast to determine the winner.

Lovehoney’s Lingerie Designer, Heather Mercer, said: “We are absolutely thrilled to have been named the UK’s Favourite Lingerie Retailer. Even though Lovehoney has not always been known for lingerie this is all changing, and with the launch of our own lingerie brand, Lovehoney Lingerie, there are exciting things to come!”

Around a third of Lovehoney’s sales come from lingerie. In the past year, the retailer’s lingerie department has been booming, and with the enormous selection of styles and sizes, it’s not tricky to see why.

Lovehoney’s super-sexy basques, babydolls and bras have caught the attention of women across the country, with most items receiving top marks by independent reviewers. Lingerie sales are up 47% year on year, with growth set to continue.

In 2014, Lovehoney launched its own lingerie brand and, one year on, Lovehoney Lingerie is now the best-selling lingerie brand on Lovehoney’s website. It has been designed for women of all shapes and sizes go from 6-24.

Sales have been boosted with successful celebrity endorsements from MTV stars, Chloe Goodman from Ex On The Beach and Marnie Simpson from Geordie Shore.

Lovehoney’s Lingerie Category Manager, Gemma Pestel, said: “We’re especially excited to win this award because it was voted for by the public. Lovehoney’s customers are fantastic and we’re so pleased that they’re responding to our investment in Lovehoney Lingerie and third party brands. We’ve got some big plans for 2016 – watch this space!”

It is thought that lingerie sales will peak in the two weeks prior to Valentine’s Day as couples look to inject more excitement into the bedroom.