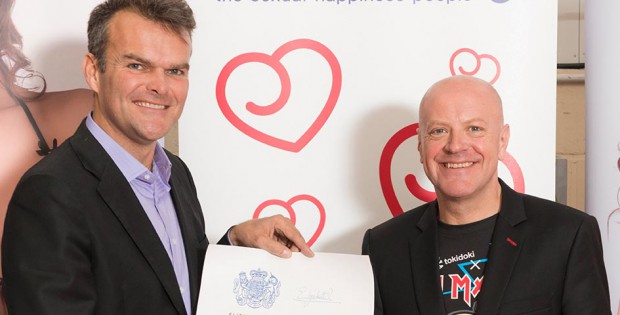 Lovehoney have officially received the the Queen’s Award for Enterprise for boosting international trade. Owners Richard Longhurst and Neal Slateford were handed the coveted chalice and scroll at a ceremony at the award-winning sex toy retailer’s Locksbrook Road headquarters on the 26 October, 2016. Everyone based at the Bath Headquarters was in attendance.

The Queen’s Award for Enterprise is awarded to British businesses who excel at international trade, innovation or sustainable development. Lovehoney co-owner Richard Longhurst said: “It is a huge privilege for Lovehoney to be honoured by the Queen. The award will help us to reach new markets and create more jobs in Bath and in our offices in Australia and the US. The Queen is Britain’s greatest Trade Ambassador and to have her backing means the world. Long may she reign over us.”

Neal Slateford, co-owner of Lovehoney said: “We’d like to thank our fantastic team for the support they have given us, we seriously could not have done it without them. We never thought back in 2002 when we started out that one day we’d be given the thumbs up from the Queen. The crystal chalice we have received will take pride of place in our packed trophy cabinet.”

In April, Lovehoney was given the Queen’s Award for International Trade for outstanding growth in overseas sales over the last three years – on the day of the Queen’s 90th birthday. The award allows Lovehoney to use The Queen’s Award emblem in advertising, marketing and on packaging for a period of five years as a symbol of quality and success. Lovehoney’s turnover has shot up to over £50 million per annum and the company employs more than 250 people all over the world.

Lovehoney has the exclusive worldwide licence to make all official Fifty Shades pleasure products and it has developed several ranges with E L James, author of the trilogy. Sales at Lovehoney have increased four-fold since the first Fifty Shades book was published four years ago, sparking a boom in demand for Lovehoney’s products.