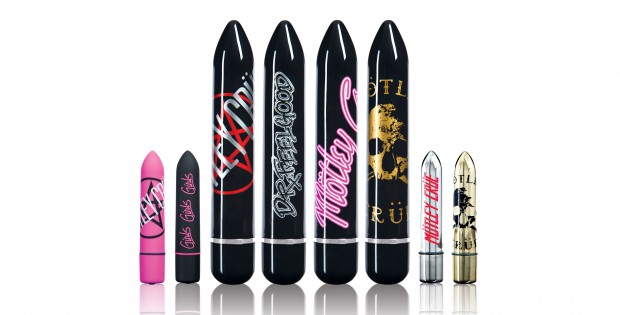 Mötley Crüe – The Official Pleasure Collection, manufactured by Lovehoney and approved by the band, has enjoyed a lot of mainstream media coverage since its launch at the ANME Founders Show in July. Despite not even being available to the public until September, music magazines such as NME, Classic Rock, Rolling Stone and Team Rock were hot off the mark to report on the range.

They were joined by other print and online titles, including popular UK news site the Independent, who announced the range to its 90 million monthly readers with the headline “Mötley Crüe vibrators: How branded sex toys can sexually liberate fans”. Mega US business site Forbes.com told its 46 million monthly visitors that the “dream of having the chance to own a sex toy honoring one’s favorite rock group has finally, thankfully, become a reality for fans of Mötley Crüe”. Irish channel TV3’s flagship celebrity and entertainment show Xposé reassured fans that “Mötley Crüe will live on in lusty fans’ bedrooms” and that they could snap up the toys “in time for Christmas”. Iconic music site NME shared the exciting news with its 120,000 daily visitors along with Daily Headbänger, Germany’s Rolling Stone and Team Rock – whose article has already been shared a whopping 341 times.

Lovehoney’s International Sales Manager Jim Primrose said: “We’ve been blown away by the positive reaction from the world’s media and our press team have been inundated with requests from top journalists and bloggers wanting to review the range. It’s a fantastic indicator of how popular this range has the potential to be when it hits the shelves in September. Retailers should add this rock’n’roll collection to their sex toy repertoire – it’s about to top the charts.”

Mötley Crüe – The Official Pleasure Collection comprises a set of eight mini and midi-sized vibrators, emblazoned with the band’s iconic typography and distinctive artwork, as featured on classic albums ‘Girls Girls Girls’, ‘Shout At The Devil’, ‘Too Fast For Love’ and more.

The band – made up of Vince Neil (vocals), Mick Mars (guitar), Nikki Sixx (bass) and Tommy Lee (drums) – has sold over 100 million albums globally, with countless sold-out tours, playing to millions of fans. The new Mötley Crüe toys are available to pre-order now, shipping to retailers in September. Point of sale materials are also available.