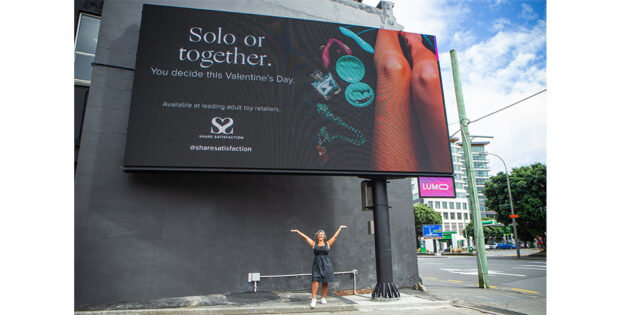 New Zealand’s ‘mother of orgasms’ Taslim Parsons, the Wellington businesswoman responsible for bringing the country’s second best-selling sex toy for 2021 to market, has taken over New Zealand billboards with a Valentine’s Day message for Kiwis: ‘Solo or together? You decide.’
Taslim is behind New Zealand sex toy brand Share Satisfaction, which became New Zealand’s first luxury sex toy brand with a full range of products when it launched in 2019. Its flagship product Kama, a dual stimulation sex toy, was named New Zealand’s second best-selling sex toy for 2021, just behind the Satisfyer Pro 2. Taslim said thousands of Kamas are sold in New Zealand each month, and the Share Satisfaction’s range features over 300 other products designed for people of all genders and experience levels to explore new pathways of sexual pleasure. “Sex toys have gone mainstream, and people are realising that they’re a great way to explore our bodies and what feels good, either solo or with a partner. And who doesn’t want better sex? With these billboards I want to remind New Zealanders that regardless of whether they are single or in a relationship this Valentine’s Day, sexual exploration should be celebrated, not shamed. Our Valentine’s Day message is all about sexual empowerment, consent, and sexual pleasure for pleasure’s sake. Because sex is normal, healthy, and everyone deserves to have a great sex life!”
As New Zealand’s self-proclaimed ‘mother of orgasms’, Taslim said she gets a kick out of knowing how much pleasure she’s responsible in New Zealand, as well as overseas. “Nothing makes me happier than looking through the comment sections on social media and seeing how often Kama is praised for giving people the best orgasms of their lives. I’m literally the mother of orgasms! I love that I’ve helped to bring so much pleasure to people’s lives. We’re literally sharing satisfaction with the world, and it’s such a buzz.” The billboard campaign is in seven high-traffic locations across Auckland, Wellington and Christchurch. “It’s great for the adult industry because we don’t sell direct to customer, we sell to retailers, so we’re helping to grow the market by promoting our brand and sex toys directly to the public”.