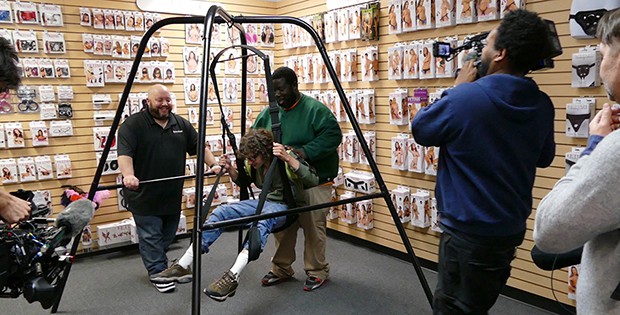 VICE Media visited the Pipedream facilities as part of an upcoming pilot on manufacturing jobs in the US. Head of TV Development at VICE Media, Brendan FitzGerald along with director Lance Bangs contacted the manufacturer earlier in the week about the project then arrived Wednesday with a full crew and comedians David Gborie and Jesse Elias of Flophouse who serve as the show hosts.

After a rundown of a company and industry history, Rob Phaneuf, Pipedream’s VP of development, led the tour through all of Pipedream’s manufacturing plants while David and Jesse got a hands look at how sex toys get developed and produced. The piece will be distributed through one of the brands many international broadcast channels.

“I’m a huge fan of VICE!” said Pipedream’s Chairman and CEO Nick Orlandino. “It’s amazing to me that Pipedream continues to be recognized by the mainstream media as not only the largest, but the authority in the adult novelty business today.” The VICE team spent the entire day shooting at Pipedream.

The upcoming VICE piece is the latest in a string of other mainstream media appearances featuring Pipedream including Jimmy Kimmel Live, Vanderpump Rules and Billions. The manufacturer uploaded some pictures of the shoot to its company blog.