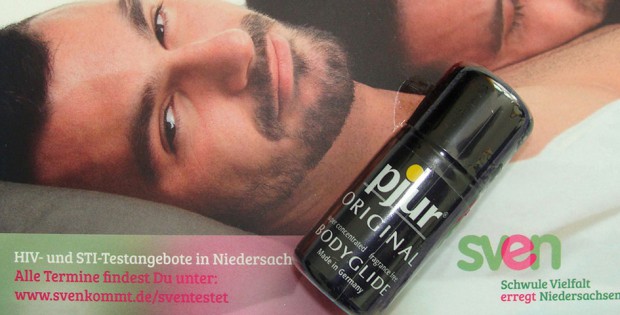 Supported by pjur, Aidshilfe Niedersachsen (Lower Saxony) – one of the biggest aids prevention organizations of Germany – is offering free advice and tests for HIV and sexually transmitted infections to gays. Health authorities, aids support agencies and other prevention organizations will be offering anonymous advice and tests for men until May 31, 2017 under the motto “SVeN kommt – SVeN testet” (SVeN comes – SVeN tests). SVeN stands for “Schwule Vielfalt erregt Niedersachsen” (Gay Diversity Excites Lower Saxony), and is an initiative by Aidshilfe Niedersachsen.

Every flyer handed out includes a 10ml bottle of pjur Original. The small bottles will also be distributed at various information and prevention events. “pjur personal lubricants always go down well with the target group, which is why we’re thrilled about the support from pjur,” says Andreas Paruszewski from Aidshilfe Niedersachsen.

Some sexually transmitted infections (STIs) such as HIV, syphilis, chlamydia and gonorrhea are very widespread among men who have sex with other men. Using condoms reduces the risk, but transmission is still possible. Anyone who has more than ten sexual partners in a year should get checked annually for STIs.