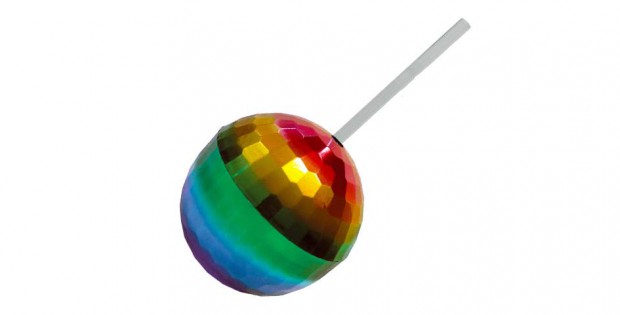 Each cup holds 12 oz. and includes a hard, plastic straw that is designed to only be removed from the cup if the lid is taken off. These cups also reflect light like a disco ball. So it could be placed on a turntable or twirled via the straw to create disco lights as long as there is sunlight or a bright light shining on the cup.

Kheper Games also offers rainbow shot glass sets for pride enthusiasts, including the penis shaped Rainbow Shot Glass Set and their original Test Tube Shooters. Each shot for both sets holds 1.5 ounces of liquor. The great benefit of these sets is that the shots are each a different color of the rainbow.

Kheper Games’ card game Sex!, also has Gay Sex! and Lesbian Sex! versions. Each deck includes over 50 sex positions, and even a few with an extra player in the mix, should a couple wish to include additional players.

Gay men can also add either Penis Party Straws, Penis Party Picks or Male Stripper Straws as a fun accessory to Pride parties. Lesbians as well can enjoy the Female Stripper Straws. The straws and picks are great items a party host can share inexpensively with their guests, so that everyone has a fun little pride present to enjoy.

“As a gay business owner and CEO, it is very important for me personally to offer a line of products for Pride celebrations.” explains CEO Brian Pellham. “It’s an important time of year for my husband and I, and also for the close friends we consider family.  We take great pride at Kheper Games, that we can offer so many strong selling items that work great for pride.”

Tags:Gay, Manufacturer
Back to Front Page