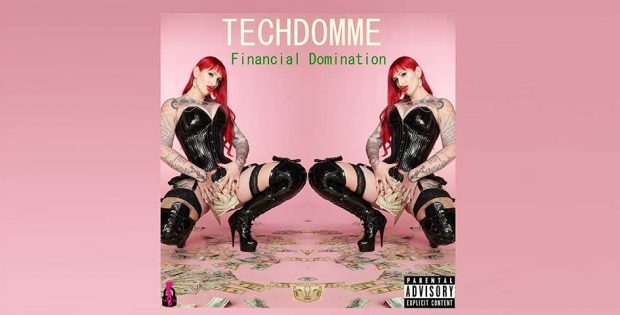 Financial Domination is Harley’s first foray into the music industry, and the first full-length album to be released by a renown Pro Domme.

Available for purchase on Amazon, iTunes, Google Music, or direct from TechDommeHipHop.com, the album delves into the world of submissive men and the powerful women who dominate their lives and bank accounts.

“I have always enjoyed listening to hip hop music, and after growing up listening to artists like Ice-T make music about pimping out and exploiting women, I thought turn-about was fair play and that it would be fun for a woman like me, who also has real life experiences in pimping and exploitation of men to make a similar album,” says Harley of the inspiration behind her songwriting.

Mistress Harley’s unique TechDomme brand centers around full, consenting control of her submissive male clients, lending a seductively deviant and outright bitchy attitude to her record. Once under her command, Harley monitors her subs 24/7 using home security cameras and GPS tracking, and often has full access to their bank accounts, which she frequently empties to her submissives’ delight.

“Many of my subs paid to participate in this album, and loved admitting the power that I have over them to my audience,” she says. “They want other men to know that this is also a valid lifestyle choice and that they love being dominated by a woman.”

Harley has been heavily featured in mainstream media over the last several years, including interviews in Vice, New York Post, and Engadget. This brainy fetish queen is also a published author, holds a Masters in Information Technology and Library Science, and was once a project manager in San Francisco’s tech industry.

Since cleverly transitioning to a self-made millionaire in the online kink industry, this in-demand Mistress plans on venturing into other artistic projects that inspire and empower other women to take command of their feminine privilege.

Visit TechDommeHipHop.com to learn more about Mistress Harley and her debut album, Financial Domination, or email TechDomme@Gmail.com for press inquiries.

Tags:Music, USA
Back to Front Page