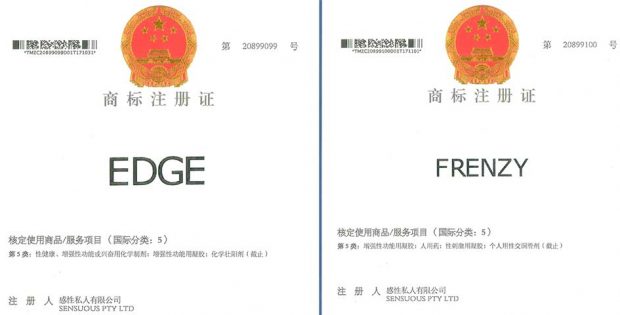 After four long years Sensuous has finally won back key trademarks for two of its bestselling products. The Australian company went into battle after it discovered that its distributor in China had started making and selling counterfeit Sensuous products and had not only stolen some of their IP but had blatantly tried to trademark the product names Edge and Frenzy in China.

Keith Jones, joint founder and CEO of Sensuous said that at the time he just couldn’t believe what was happening.“We had been exhibiting at the AAE show in Hong Kong and had invited our Chinese distributor to be on our booth. We thought that everything had gone well, and our distributors had gone back to China with some very good orders. When we got back to Australia we were surprised that after a few weeks we still hadn’t received an order from our distributors in China. We checked their web site and were horrified to see that they were now selling their own version of Edge and Frenzy and claiming that it was a Sensuous product, they were even using our product videos! We were more than flabbergasted! This was obviously something that they had been planning for some time and to add insult to injury we discovered that they had applied for the Chinese trademark for both Edge and Frenzy.”

Edge and Frenzy are two of the company’s best-selling products with Edge being a delay gel for men and Frenzy being a topical clitoral stimulant. The company then instructed trademark lawyers in China and Australia to see if there was a way to intercept the counterfeit application. They discovered that then the battle was to prove who used the trademarks first in China. The race was on.

“We knew that we had exhibited in China a long time before we had met these distributors,” said Jones, “so we had to find proof to substantiate it. But every time we found any documentation which we thought would be fine, the Chinese authorities kept telling us that what we were providing could be counterfeit. It was extremely frustrating!”

The company finally managed to get their local council involved who were able to substantiate that Sensuous had travelled to China with them as part of a trade mission back in 2010. This and pages of other proof and documentation were handed to the lawyers in China and then the waiting game began.

“Both of our lawyers, in Australia and China, agreed that even with all the proof and all our weighty evidence our chances of winning were no more than fifty-fifty. Apparently, that’s how things work in China. Quite frankly, it had been such a long time that I had given it up. I was absolutely delighted when I got the notification that we had won, and that we were now the true official owners of the Chinese trademarks Edge and Frenzy. It has been a long time coming. It is certainly a victory, but maybe more of a moral victory than anything else as the next battle will be making sure that our product replaces any counterfeit products out there.”

After this incident the company has kept away from China, but it now feels more confident to enter back into that market place. The company will be exhibiting at the Asia Adult Expo in Hong Kong in August.