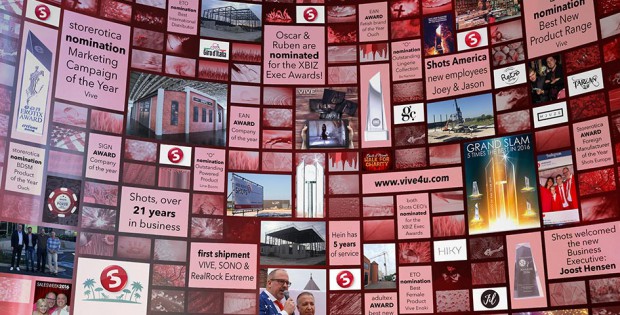 SHOTS would like to have a final look back on this year before the start of 2017. For Shots, the year started with winning the XBIZ Award for Best New Pleasure Company of the Year for Shots America. Later this year, new brands like SONO, RealRock and VIVE started shipping for the first time. Almost 400 new toys were released and six new brands (JÌl, HIKY, RETRO, MJUZE, MJUZE, TARZAN) were introduced. To top it off a 650 exclusive private labels were designed and created by our own in-house design studio.

The year 2016 has been the time to create new partnerships for SHOTS and to celebrate several anniversaries of loyal employees. Account manager Ralf Albers celebrated his 15th anniversary with the company in style and account manager Hein Schouten did the same for his fifth anniversary. The company also welcomed three well-known industry members into the company. Joost Hensen started as the New Business Development Manager for Shots Europe while Joey Teodoro became sales executive Canada/Eastern USA and Jason Miller was appointed as sale executive for Western USA.

SHOTS is also known to organize great parties for their clients and 2016 has been no exception. It started in March with the annual SHOTS International Poker Tournament causing some thrilling moments in our Dutch headquarters. In May, one of the biggest cycling competitions, the Giro D’Italia, passed the SHOTS offices. And then there was the SHOTS Pré-Party and the SHOTS Party. Organized at the end of the in-house sales week and in conjunction with the 4-Day Marches of Nijmegen, this is always one of the highlights for the company. Together with its suppliers and customers, SHOTS raised a record-breaking amount for charity. This was also the start of the SHOTS Charity Foundation, giving more possibilities to donate the funds to various worldwide charities.

“We hope that your year has been just as good or even better than ours, and that you have accomplished a lot of goals you set for yourself! We would like to wish everybody Happy Holidays and hope to see you again in 2017,” the company said.