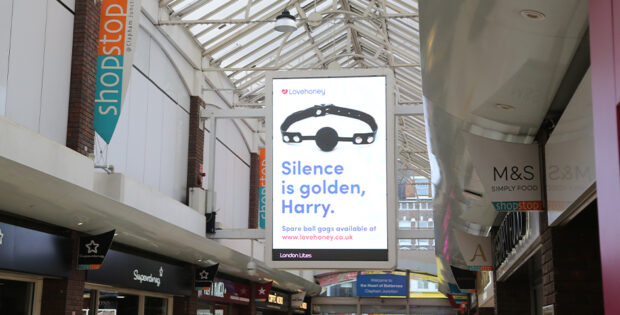 Lovehoney, has launched a new OOH campaign with a billboard commenting on the recent controversies around Harry’s memoir Spare.

Created by Lovehoney, the ad features a ball-gag alongside the words ‘Silence is golden, Harry’, taking a humorous perspective on the current controversies around the launch of the book, and reminding everyone – with a wink – that not all family tea needs to be shared with the public.

In the past, Lovehoney has been an ardent supporter of Harry and Meghan, even launching a commemorative “Royal Wedding Penis Ring” to celebrate their marriage in 2018. Furthermore, Lovehoney welcomes the open discussion around racism and bullying that the pair have been brave enough to share. Yet, the launch of the book and the revelation of sensitive, internal family matters seems to be taking the discussion for some people a bit too far.

Lovehoney has twice received the Royal standard of approval, having been granted the Queen’s award for Enterprise in 2021, and the Queen’s Award for International Trade in 2016.

“The late Queen and Royal Family have been wonderful supporters of Lovehoney’s journey to become the leading brand for pleasure products, having twice granted us with their prestigious award. While we have been closely following Harry’s and Meghan’s journey and wishing for their happiness, the vivid details about Harry’s penis and forays with older woman may be categorized as “tmi.” With times hard for many, we hope to bring a smile to people’s faces with our unique ‘gag’,” comments Johanna Rief, Head of Sexual Empowerment at Lovehoney.

This is not the first crafty OOH campaign in the company’s history. In May last year, the ‘Ogle’ campaign created by McCann Birmingham featured a creative billboard design aimed to help consenting adults turn off Google SafeSearch and find sex-positive content and products. Furthermore, during the pandemic in 2020, Lovehoney raised a smile with its cheeky campaign around wearing masks at home.

Tags:Marketing, Promotion
Back to Front Page