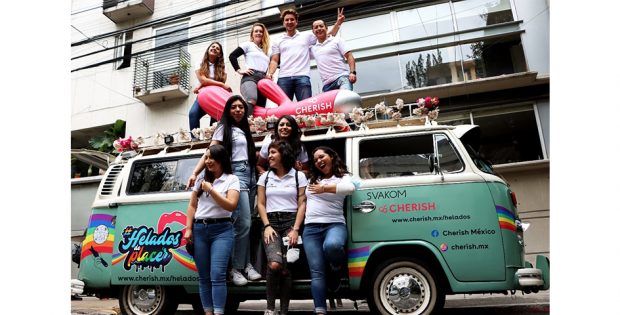 SVAKOM and CHERISH, a Mexican online retailer, joined forces in Mexico City to create a two-day event titled ‘Helados de Placer’ (‘Ice Cream of Pleasure’). Free ice creams were giving away when the van was cruising around Mexico City. The event was described as ‘a celebration of self-expression and sex positivity’. More than 1800 people participated this two-day event, and many were interviewed. Positive feedback was given regarding how well-made the toys are and people showed appreciation about the professional advice offered when demonstrated the usage of the toys.

“We were surprised by how many people stopped in front of our van and showed curiosity about the toys”, said the founder of CHERISH. “It’s in total 10 hours of active promotion, our staff’s great energy throughout the event definitely played an important part in making everyone feel welcomed.”

“Mexico’s rich and vibrant culture along with its multi-layered history is the perfect place to create a campaign to raise awareness to a demographic that has not been exposed a lot to sexual well-being”, a SVAKOM rep explained. “This is the place where the new meets the old, and it’s great to see that Mexico as a progressive country welcomed our brand with open arms.”

“Many people would feel embarrassed or intimidated to step into a sex shop, by bringing a colorful van into the streets that offers ice creams, and spreading positive energy around the city, it’s much easier to break the boundaries and taboos revolve around sex toys. We are proud of what we do and love to make more people join this movement of liberating their sexuality. It is after all, an expression of self-love. It’s a successful event that we would love to do again!” added a SVAKOM rep.