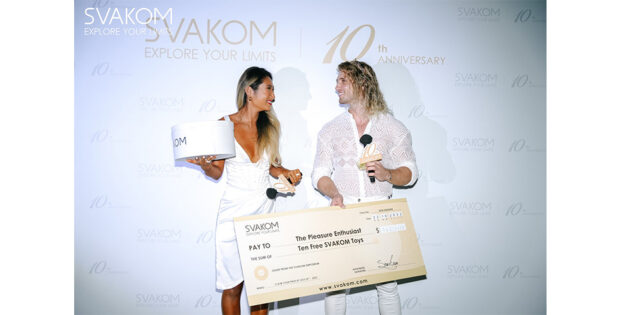 SVAKOM expands celebrations of it’s 10-year anniversary to Shenzhen, where guests were treated a night of entertainment. The party, which had over 100 guests in attendance, promoted SVAKOM products and all campaigns related to SVAKOM’s 10th anniversary. Hosted at the Four Seasons Hotel, Shenzhen, guests were treated to an all-you-can-eat buffet which featured a fusion of eastern & western cuisine, as well as an open bar. Throughout the night various methods of entertainment were provided including a DJ, lucky draw – with a 1st prize of 10 free SVAKOM toys, cake cutting ceremony, and drag performances.

Taking place on October 22nd, the Terrace sections of the Four Seasons Hotel were decorated with SVAKOM designs and guests were required to come dressed in ‘stylish white’. Speaking on the experience of the night, the event organizer and SVAKOM representative Tiaan van der Merwe said: “There was a meticulous level of planning that went into organizing this, it’s our tenth year in the industry – a whole decade – and we wanted to give those new and old to SVAKOM a chance to mingle and have fun, we wanted them to walk through the doors and be blown away.”

SVAKOM’s 10-year anniversary party hosted a range of guests, including local influencers, and offered a livestream which reached upwards of 140,000 views throughout the night. Guests were offered complimentary gift bags at the end of the night containing either SVAKOM Products Winni 2 or Pulse Pure.

Overall feedback from guests was overwhelmingly positive with many commenting on the decoration, the quality of the food and drinks, and the prizes available. Tiaan commented on his general impressions, saying that: “We had a lot of people coming up to us saying how much fun they had and, of course, how much they loved the open bar. In general, the atmosphere was almost electrifying – infectiously joyous with everyone either dancing or talking amongst themselves.”

Tags:Anniversary
Back to Front Page