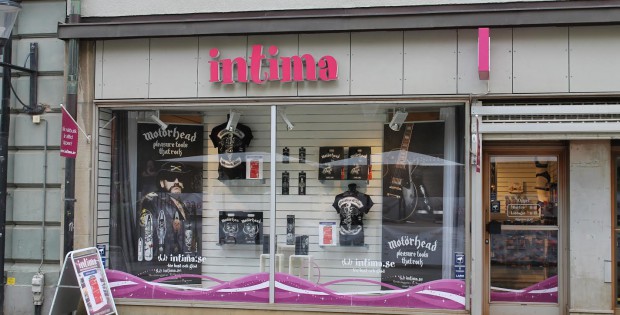 More than 50,000 rocks fans flocked to the Bråvalla festival in Norrköping from June 28 to July 1 featuring a string of big names including The Killers, Linkin Park and dance star Martin Garrix. Intima created a rock and music inspired window in its Norrköping store featuring products from the exclusive collection named after the legendary rocker’s biggest hits such as Bomber and Overkill. Intima’s Managing Director Daniel Amneklev said: “Having a rock theme in our window was a great way to get noticed during Bravalla. Some many music fans visit the town during the festival and lots of them are interested in buying toys to add to their fun.” Jade Bawa, Lovehoney’s Sales Executive, said: “Lovehoney is always keen to work with retailers to create eye-catching displays to support our products. Intima did a brilliant job with Motorhead for Bråvalla – the window rocked! It is a great way of introducing music fans to pleasure products.”
Intima previously featured Lovehoney’s Official Fifty Shades Darker products for window display to tie in with the release of the movie in February.