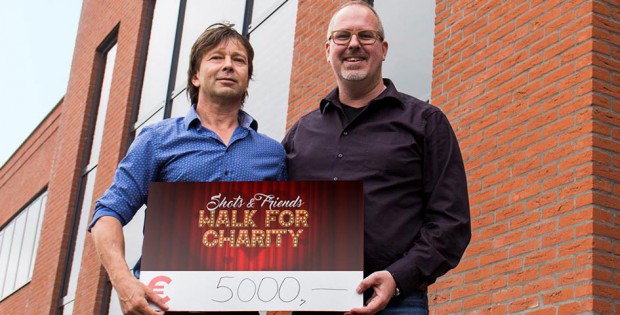 During the SHOTS Party 2016, the company announced the birth of the SHOTS Charity Foundation. This foundation wants to focus on the smaller, lesser-known charities that operate without overheads and expensive CEO’s, so the full donation amount can go directly to those in need. During the Sales Week and the Shots Party, the Foundation managed to raise a total of €14.029,40. From this fund the first donation of €5000 has just been delivered.

The first charity receiving this donation is De Liedjesfabriek (The Song Factory). This charity offers sick children a positive distraction through music and song writing. Musicians visit children’s hospital wards with a “songmachine” to write and record a personal song for each child. Through the process of songwriting the children can forget their illnesses for a while, which inevitably gives them a new found energy and enthusiasm. Not satisfied with only working in hospitals, “De Liedjesfabriek” plan to go and visit children who are being taken care of at home.

To realise this plan they first need a bus, which would be converted into a mobile recording studio. With a bus like this they can take the children to their school or club while writing and recording their own song during the journey. Oscar Heijnen stated: “We are really proud our new foundation and this ability to support many different small and lesser-known charities in doing what they do best: help those in need.” He continues, “The ‘Liedjesfabriek’ puts a smile on the faces of these sick children and helps them forget their troubles. Even if it is just for one day, to them it means the world and it really is something that they will remember for a long time. Knowing that we played a small part in this with our donation, makes us extremely proud.”

The SHOTS foundation has also donated €792 to The Alzheimers Society who are leading the incredible fight against dementia. During the year to come several small charities will be selected to receive donations.

Tags:Charity, Shots
Back to Front Page