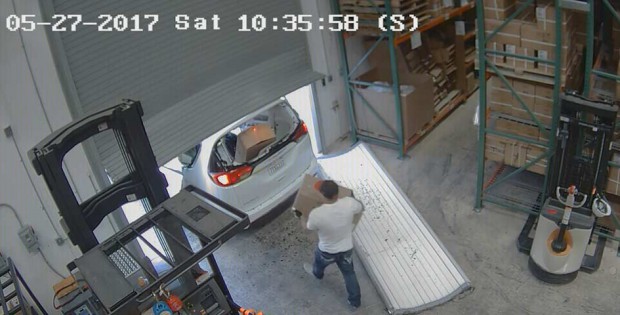 This past weekend saw one of the strangest robberies of 2017 caught on camera, as two men escaped with close to 30,000 LELO HEX condoms, and then returned the next day to steal a further 33 LELO HUGO vibrating butt plugs, among other bestselling sex toys valued at up to 199 EUR each.

The first robbery took place on May 26th, at approximately 7.45pm (PDT), after the LELO US Las Vegas warehouse closed early for the US Memorial Day long-weekend. Security footage shows two thieves entering through a back gate, and making off with two large shipping boxes of LELO HEX (each holding 15120 individually wrapped condoms). Moments later, one of the thieves returned to take more 36 packs before making their getaway.

More surprisingly, the thieves returned the following day, May 27th, at 10.30am (PDT) on May 28th, ramming a rental car through the loading dock gate, also captured on CCTV. The video of the second raid shows a man running through the factory inspecting the goods, before throwing a large box of 33 LELO HUGO vibrating butt plugs through the car’s broken rear window. He then returns and does the same for a box of 48 LELO LUNA Beads (a women’s Kegel exercising aid) and another box of goods that has yet to be identified. The Las Vegas Metropolitan Police Department arrived on the scene after both incidents, unfortunately too late to apprehend the thieves.

LELO’s US President, Pavle Sedic said: “At this stage, we’ll be happy if the thieves just use the condoms themselves. We’re currently working with the police to identify those responsible and ask members of the public to get in touch. Two raids in less than 24-hours is pretty shocking, but everyone knows it’s close to impossible to get additional security during Memorial Day weekend and the thieves obviously realized that. They seemed to have a very clear idea on what they were looking for.”