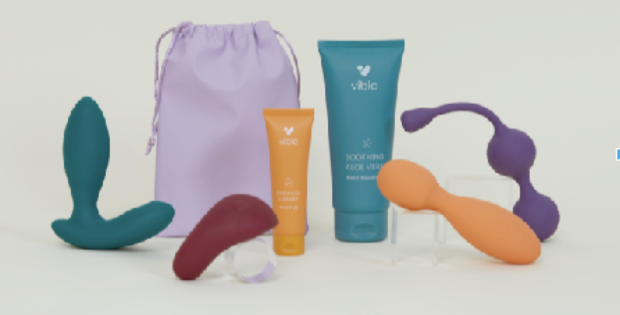 On February 11, Vibio, the queer and women-owned sextech company, has become the first in the world to register its app-controlled toys with The Vegan Society’s Vegan Trademark. Vibio was founded in 2018 by childhood friends Alma Ramírez Acosta and Patricia Cervantes Santana. They launched their first vibrator and accompanying app on Kickstarter – the global crowdfunding platform – allowing users to control the wearable toys via the app as well as having educational content too for those wishing to find out more about sexual wellbeing. All four of Vibio’s toys, including Frida, the first toy in the range, are now certified with the Vegan Trademark. Meanwhile, the Glee and Wake lubricants, which are entirely free from animal-products and testing, have also been registered. Both lubes come in eco-friendly tubes made of 100% sugarcane too. Reacting to the news, Ericka Durgahee, Marketing Manager at The Vegan Society, said: “Registering our first electronic personal toys with the Vegan Trademark is expressly exciting news for the team. Not just because Vibio are such a trailblazing company, but also because it means we’ve taken new steps into the registration of electronic products. Thank you for working with us Vibio!”
“Many people don’t realise that a lot of lubricants, toys and even condoms can contain animal derivatives, such as certain enzymes, animal skin and beeswax, or may have been tested on animals. For years, a lot of vegans, whether they’re single or in a relationship, have had to miss out or compromise on comfort and pleasure because of their ethics. However, thanks to the incredible team at Vibio these sleek innovations are available to vegans too.”
Vibio co-founder, Patricia Cervantes Santana, added: “We’re firm believers on the power of tech when it comes to creating change and positive impact in the world, and wanted to apply this to the sexual wellness space. Our mission has always been creating an inclusive brand that would not only make tools to explore sexuality but combining them with content to guide people in their sexual journey. As a vegan myself, it was essential that our products be accessible to the vegan community as well.”
While Vibio is the first company to register app-controlled vegan toys, there are currently 12 different lubricants registered with the Vegan Trademark.