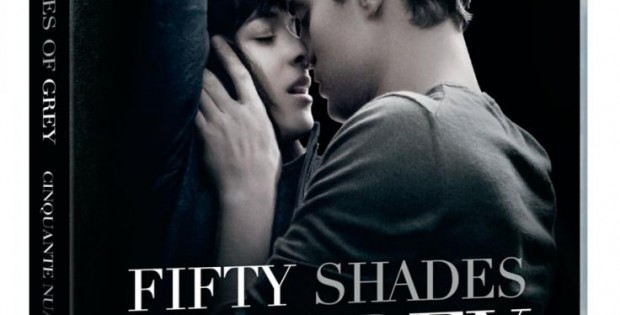 It’s here! “The Fifty Shades of Grey – The Unseen Edition” DVD is now available at Eropartner Distribution. Since the release of the “Fifty Shades of Grey” trilogy by E.L. James, the books have been translated into 51 languages worldwide and have sold over 100 million copies in print and electronic formats. Thus making it one of the biggest and fastest selling books ever. With no signs of slowing, the “Fifty Shades of Grey” franchise continues to grow from strength to strength with future merchandise releases to follow. The first book “Fifty Shades of Grey” was a runaway success and a number 1 best seller, following its popularity the book was adapted for film which was released in cinemas earlier this year. The first book in the trilogy explores the romantic and erotic relationship of handsome billionaire Christian Grey and inexperienced college student Anastasia Grey. The now iconic characters are played Jamie Dornan and Dakota Johnson respectively. Directed by British filmmaker Sam Taylor-Wood, the film is produced by Michael De Luca, Dana Brunetti and E.L. James. The screenplay was written by Kelly Marcel.

Unlike the cinema release, “Fifty Shades of Grey – The Unseen Edition” DVD offers bonus material including an extended version, an alternative unseen ending and a teaser trailer to the next instalment. The DVD is available in English and French, with subtitled versions in English, Dutch and French.

With the recent release of E.L. James’ new book “Grey” as told by Christian Grey, the release of a new range of unique bondage restraint sets planned for July 2015, and second and third instalments of the “Fifty Shades of Grey” trilogy scheduled for 2017 and 2018 respectively, the Fifty Shades phenomena looks set to grow and grow over the forthcoming years.

To find out more the DVD and to view the trailer, please refer to http://wholesale.eropartner.com/product.php?productid=E25649 or contact Eropartner Distribution on info@eropartner.com

Tags:Distribution, Fifty Shades of Grey
Back to Front Page