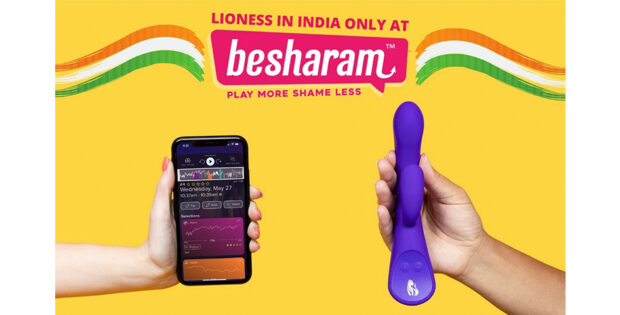 Besharam, founded in 2011, went live in India in 2013. Ever since, the company has been a pioneer and instrumental in opening up the adult products category in India. With partnerships and alliances with several major brands like Fleshlight, Rocks Off, Bijoux Indiscrets, Screaming O, Hustler, Tenga, Rene Rofe, Baci, Lovense, and many more, it has established itself as the market leader for adult and sexual wellness products in India.

Liz Klinger, CEO and Co-founder of Lioness, says the company began selling their vibrators internationally just last year. “The category of sex trackers and biofeedback/AI vibrators is still new, so we’ve had to be very selective with our international retail partners.” She adds, “We’ve admired Besharam’s leadership in India and, after seeing success partnering with Fermata in Japan and Singapore, we knew this was the next step to getting Lioness in a new region. We couldn’t be more thrilled for this partnership!”

Raj Armani, COO & Co-founder of Besharam said “Even before our formal introductions we were in awe of the market positioning that Lioness has established for its brand and HERO product, it was only to our delight we ended up having the opportunity to bring Lioness to India through a mutual partnership understanding. Liz & Anna run a tight ship, they know their audience, their product, the opportunity, and customer behavior, all we had to do was showcase them on Besharam and bring them to India where the demand for vibrators has surged 244% in the last 12 months. There are many brands that we carry offering similar products, but we are confident the technology and craftsmanship that sets Lioness apart will be recognized by our audience and appreciated as well. We look forward to being the new den for the Lioness in India.

Tags:Distribution, India
Back to Front Page