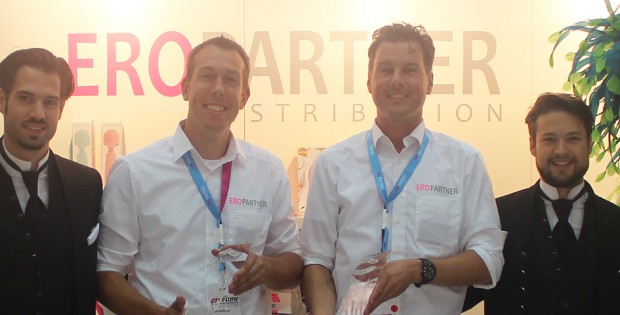 Eropartner Distribution won the award for Distributor of the Year by both EAN and SIGN magazine. Additionally they also they won the Erotix award for Best Brand Collection. This is their fourth award, as earlier this year in Los Angeles they won the title of Best International Distributor at the 2016 XBIZ Awards. The awards were handed over at the eroFame trade event in Hanover.

“We are greatly humbled and honoured to have received those great awards”, says Eropartner Distribution’s co-founder Chris Bakker. “Recognition by one’s peers is one of the biggest compliments, and my congratulations and thanks go to our team for working continuously at the highest level of performance”.

“A big thank you and my compliments to everyone at the Erofame organisation, for taking care again of an incredible event and for all they have done for our industry”, adds Elcke Wieffering, Head of Purchasing at Eropartner Distribution. “We are grateful for being part of such an amazing industry and would also like to thank our retail partners and customers for their support.”