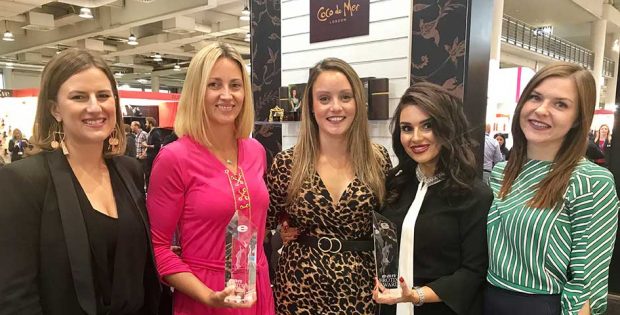 The Lovehoney Trade Sales Team is delighted to announce that they have added two more awards to the trophy cabinet. They were awarded Best Technology concept for Uprize, and Lovehoney co-founders Neal Slateford and Richard Longhurst picked up the Best Management award at the EAN Erotix Awards which were held at the EroFame trade show.

Lovehoney co-founders, Neal Slateford and Richard Longhurst picked up the Best Management award. In 2001, they founded Lovehoney with an investment of just £4,500 each. Since then, they have set up global warehouses in Bath, Atlanta and Brisbane and have even won the prestigious Queen’s Award for International Trade.

The Lovehoney trade team collected the awards at EroFame on behalf of Lovehoney on Wednesday 3rd October. International Sales Manager, Kate Hodgson-Egan said:
“ It’s great to be bringing home recognition for both our founders and our most recent innovation from EroFame. Uprize has been a hit at the EroFame show this year with many people coming to our booth to get further information on it and a better understanding of the technology behind it.”