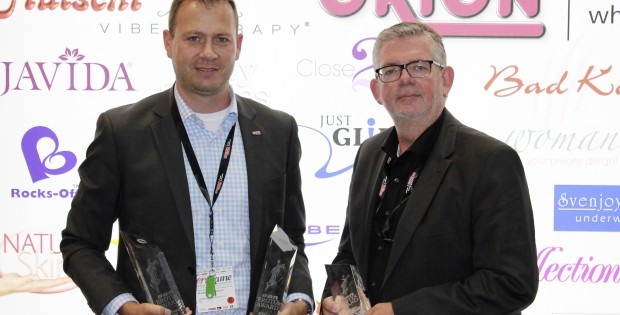 ORION Wholesale is celebrating its 30th anniversary this year, which was fittingly celebrated at the eroFame in Hanover. “We thought that the successful trade fair last year couldn’t be topped but we were proven otherwise”, said Sven Jacobsen, ORION’s Wholesale manager, happily. “The real demand for our products and the constant positive feedback from the trade fair visitors have shown us that that our 30 years of experience and know-how are still keeping us on the right path.”

The “Best Sales Team” awards given to ORION Wholesale also emphasise this. They were presented, during the eroFame 2015, to Sven Jacobsen and Hauke Christiansen, representatives of the ORION team, who were very proud to receive them. The focus for the ORION Wholesale team, during the three days at the trade fair, was on personal contacts and innovative novelties. The new Cottelli Collection packaging and the new slatwall system for a customised store design were also of great interest to the trade fair visitors.

The first winner of ORION´s anniversary competition, “Celebrate. Pack Your Suitcase”, was also announced. The winner was Povilas Klusaitis from Lithuania from JSC Interversus UAB. Povilas and a person of his choice can now look forward to a weekend away in Berlin – including the flights, two nights in a hotel and a few other extras. A weekend trip to London is being given away in October – so carry on taking part in the competition at www.orion-wholesale.com/30anniversary!