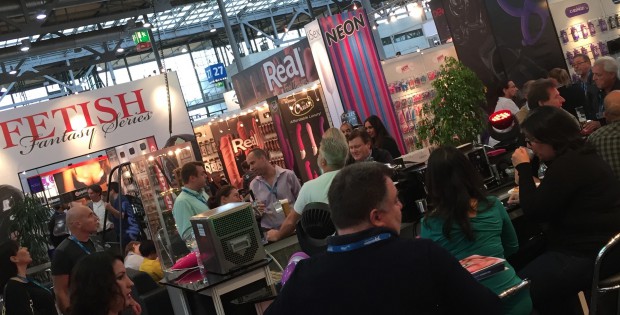 Pipedream has returned from another global adventure after an ultra-successful eroFame tradeshow in Hanover, Germany last week. Well-stocked with freshly baked pretzels and ice-cold German beer on tap, Pipedream’s massive eroFame booth stole the spotlight and reached maximum capacity. Crowds flocked to the booth for the European debut of the manufacturer’s latest additions (Fantasy C-Ringz, Icicles Gold Edition, Pipedream Extreme Toyz Mega-Bators, and extensions to the best-selling Fetish Fantasy Series and Pump Worx), though the real showstopper was the new Wanachi Mega Massager, which made its first-ever appearance at the show. At a whopping 17” tall with a huge 4.5” head, this bedside bad boy packs plenty of pulsating power with a universal 110v-240v power cord that reaches up to 17 feet. “The Wanachi Mega Massager definitely stole the show – customers could NOT keep their hands off of it! There’s truly nothing like it on the market.” said VP of Sales Steve Sav. “Our team was constantly busy meeting with partners and writing orders. It’s incredible to watch our rapid growth and success on a global level.”

Pipedream’s success was solidified when receiving three new accolades, taking home SIGN magazine’s Hot Product of the Year for their new King Cock Squirters and EAN’s Manufacturer of the Year award. Chairman and CEO Nick Orlandino was also honored with his fourth consecutive Business Man of the Year award from EAN.
The manufacturer’s celebrations continued with their third annual eroFame Extravaganza – an exclusive invitation-only party that honors the manufacturer’s global and domestic distribution partners. Hosted at Hugo’s in downtown Hanover, the event was packed with the who’s who of industry powerhouses, along with Pipedream’s signature blend of fun, food, and festivities. Over 300 party-goers enjoyed dinner, drinks, and dancing, while the Dream Team mingled with partners and supporters well into the night. “It’s amazing to see all the major players in our industry partying under one roof!” said Chairman and CEO Nick Orlandino. “Our dinner was a personal thank you to all of our customers for helping make Pipedream the number one brand in the world. I also want to especially thank my entire team for their continued hard work and dedication.”