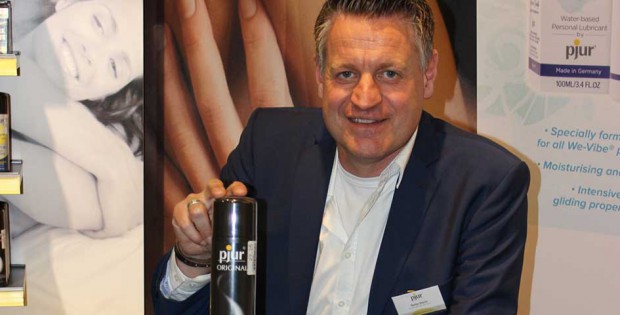 During the second weekend this March, the pjur group focused all its attention on the Netherlands. On Friday, Key Account Manager Stefan Daniel attended EDC’s ten-year anniversary. With around 80 employees, the company has grown substantially over recent years and now stocks almost the entire range of pjur products. “I was really interested to see EDC’s new premises and it was fantastic to then meet the who’s who of the industry at the party afterwards”, says Stefan Daniel. The EDC showroom also now features a new pjur superhero display.

From Sunday to Monday, Stefan Daniel ran the pjur stand at the Scala fair. The Dutch wholesaler was also celebrating an anniversary with its 30st house fair. Goodie bags were given out again this year, and they included a 10-ml bottle of pjur ORIGINAL. Stefan Daniel gave a positive review: “Many retailers had no idea that they could also get hold of the 10-ml bottles from us to sell at the PoS, so the goodie bags were a great opportunity to make customers aware of this.” Alongside pjur ORIGINAL, the focus at the fair was once again on the new MAN products.