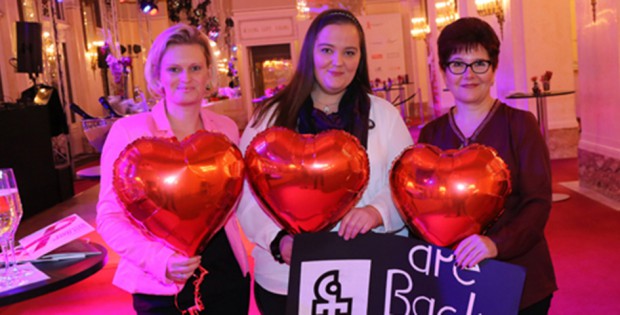 This year, pjur was once again the sponsor for the Künstler gegen Aids Gala in Berlin. The 16th annual Gala was, as usual, a complete success and was sold out two weeks in advance. Around 1,600 guests celebrated together with artists such as Angelika Milster, Caught In The Act and The Flying Steps. During the event, which was led by hosts Annabelle Mandeng and Klaus Wowereit, numerous artists participated to help the cause and donations were collected for the fight against AIDS.

The high point of the evening was the presentation of the “HIV Awareness Award”, which went to Anne Momper, wife of the former Mayor of Berlin Walter Momper, for her outstanding commitment to HIV work. More than 43,000 euros was collected during the Gala. The MAC Cosmetics company also donated a check for 100,000 dollars and the ensemble from Sister Act collected 19,000 euros for the cause – important donations, which will be used by the Berliner Aids-Hilfe e.V. organization in the fight against AIDS.

In addition to pjur products, the goodie bags that were distributed to the guests also contained a small surprise. pjur had also raffled off two tickets for the Gala. The lucky winners collected over 3,000 euros themselves for the Gala, gave their thanks for the wonderful evening and, like the other guests, had great fun representing a good cause and collecting donations for the fight against AIDS.