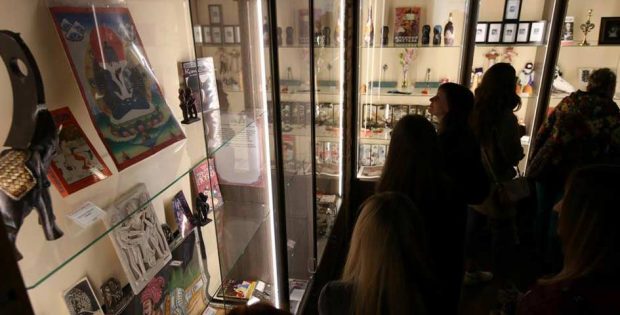 It exists since 2010, but now it has opened in the center of the city, in a modern loft-style space. And it became one of the most popular museums in Yekaterinburg. About 4000 people came to the opening of the “Museum about IT” and to its events. Visitors could view a permanent exposition with historical exhibits, for example, with the first Soviet vibrator or with underground “handmade” Soviet sex guides. They also saw the exhibition of one of the most famous artists of the city of Alexei Ryzhkov “Romantics of the city”, where the aritst presented Yekaterinburg and Paris in the form of ardent lovers. The excursion “Love in a big city: from Pompeii to Yekaterinburg” with multimedia elements was shown to people. Workers of the museum told amazing stories about how and whom they loved in ancient Babylon and Athens, in Tokyo and Berlin, Paris and Yekaterinburg.

The “Museum about IT” and the coffee house “Coffee 18+” was created by the company “Kazanova 69”, one of the oldest and largest retail and wholesale companies of intimate goods in Russia and one of the largest sex toys distributors in the territory of the former Soviet Union. The company distributes in Russia and has offices located in Moscow and Yekaterinburg.

Tags:Russia
Back to Front Page