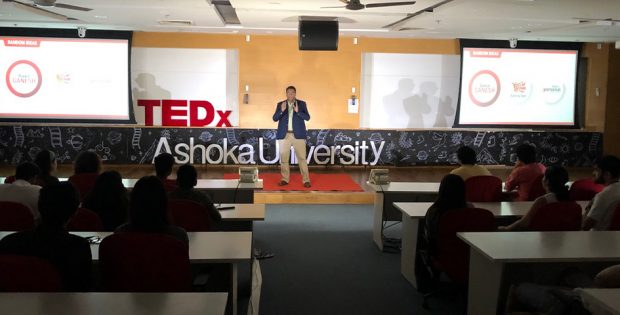 Samir Saraiya, CEO of ThatsPersonal.com, was invited by Ashoka University, New Delhi to deliver a TED-X Presentation at their conference on the theme of ‘Climbing Beyond’. Samir shared a presentation on the topic of ‘Executing Ideas’ and related some of his real-life experiences and then concluded with a framework relating to building, validating and executing everyday ideas.

The three examples that were shared include co-organising an annual street trance music-based event during the Ganesh Festival. Additionally, the thoughts and rationale that led him to launch Mumbai’s first Microbrewery, the Barking Deer. Lastly, story behind the start of ThatsPersonal.com and its subsequent achievements.

TED, which stands for Technology, Entertainment and Design, is a non-profit organisation devoted to spreading ideas, usually in the form of short, powerful talks which are 18 minutes or less. These talks cover almost all topics, from science to business to global issues.

The event was organised by Ashoka University, which is considered among the Top Indian Universities and specialises in the field of liberal education. The campus has over 2,000 students drawn from over 28 states and 101 cities in India as well as 17 International countries.

Samir’s Ted Talk is approximately 14 mins in length and can be viewed on YouTube at https://www.youtube.com/watch?v=2RZcq07sRSo

Tags:Business, Events
Back to Front Page