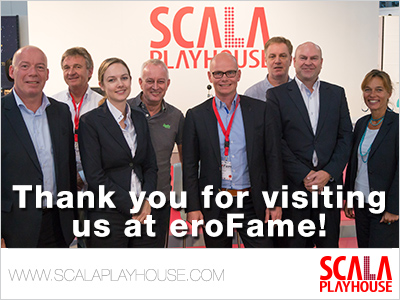 Scala Playhouse  wants to thank everyone who visited their  stand at eroFame 2015 in Hanover, Germany.  This year, they went even bigger with their stand and and showed their visitors unique new POS items and art-work. According to the exhibitor, their two newest line extensions, The Rabbits by TOYJOY and LUZ by TOYJOY were praised for their sleek packaging, great quality and even more appealing pricing.
Besides their own in-house brands, Scala Playhouse also brought various of their valued suppliers’ collections, such as ranges by CalExotics, Pipedream, NS Novelties and System JO. They also made sure to spoil their visitors with some special treats, such as delicious drinks and snacks from our luxury bar and even musical entertainment. Their sales team reported the busiest eroFame yet and is very pleased with all the great working relationships and new partnerships that were formed. They also hope to see their visitors again at the next Scala Fair on the 13th and 14th of March 2016.