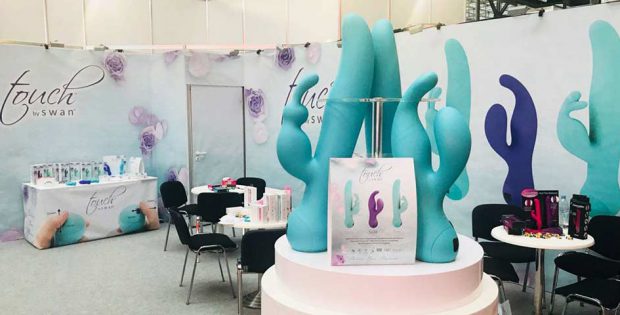 Over the past few months, Swan has been teasing its new Touch by Swan collection at various shows around the world. Using customer feedback given by colleagues at each show, Touch by Swan was officially launched at eroFame 2017. Touch by Swan was represented in a bold way using three oversized models prominently placed where everyone could see. Measuring in at approximately 61 cm (or 24”), each Touch by Swan design was featured and even had working LED lights to mimic the real products.

Touch by Swan has a touch sensitive swipe panel. It can be controlled simply by swiping in different directions. With each design, Touch by Swan maintains the features that Swan has become known for including a water resistant, 100% silicone, soft touch finish, rechargeable lithium battery, and of course, PowerBullet’s vibration technology. Touch by Swan has launched with three designs, Solo, Duo and Trio, offered in two colours – teal and purple.

As with other BMS Factory products, Touch by Swan will also be offering a retail counter display for qualifying purchases.