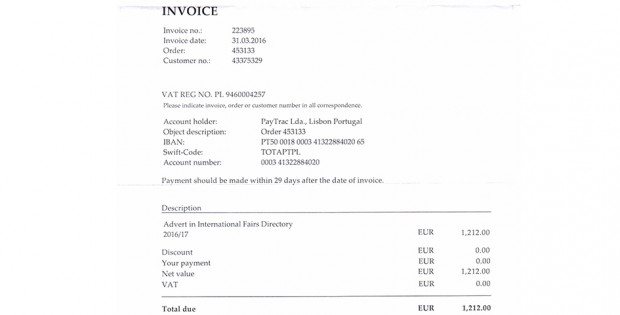 Since the first erofame in 2010, exhibitors have reported that they get E-Mails by three companies, one Mexican named Expo Guide S.C. / Connect Publisher S.C. and two Slovakian companies called Construct Data Publishers and Event-Fair The Exhibitor’s Index.

All three companies claim to be putting together an exhibitor’s list for this year’s eroFame in Hanover. The Mexican company and the Slovakian companies (maybe it is the same company but with two different locations) ask exhibitors to give certain company data on the pretext of including them in the exhibitors’ list.

The Mediatainment Publishing eroFame GmbH strongly advise all of the eroFame participants not to consent to the publication of these data or to agree to the offer at all. The fine print of the faxes sent by Expo Guide, Construct Data Publishers and Event-Fair reveals that agreeing to this offer obligates the signee to a three-year subscription to ad placements on an online platform, amounting to 1171 to 1271 Euro per annum.

The official eroFame 2016 event catalogue is published by Mediatainment Publishing Verlags GmbH and no one else. The Mediatainment Publishing eroFame GmbH have no business relationship whatsoever with Expo Guide, Construct Data Pulblishers or Event-Fair. Neither Expo Guide S. C., nor Construct Data Publishers or Event-Fair has been authorized or commissioned to create an exhibitors’ list.

Tags:Trade Show
Back to Front Page