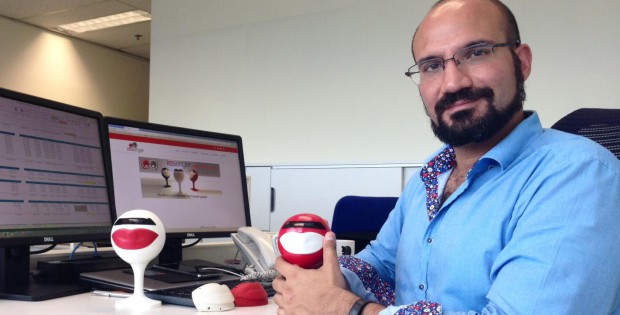 Before we talk about your product – the Kissenger – could you first introduce yourself and the people behind your product to our readers?

What is the Kissenger?
Dinos Andreou: The Kissenger is the world’s first physical kiss transfer device. To describe it simply, it is a gadget with artificial lips which, when kissed, replicate the kiss on the receiving side. It’s meant to be used to enhance intimacy during video chatting.

How did you come up with the idea of creating a device that sends kisses via the internet?
Dinos Andreou: Dr. Hooman, who is the technical head of Kissengers Pte Ltd, is a world-class authority in robotics and haptic technology and has published many articles on the matter as well as developed numerous concepts. The inspiration came from our view that there was definitely a need to improve video chats with the sense of touch. Both of us having spent many years in long distance relationships, we understood the struggle. However, we wanted to avoid going for an erotic “adult” gadget, instead opting for something more innocent and widespread. And what’s better than a loving kiss?

The original concept for the Kissenger dates back to 2011. Why did the development take so long and what were the main challenges you had to overcome during this process?
Dinos Andreou: The concept was originally conceived at the Cute Centre of NUS and it was more of a laboratory curiosity. The idea of commercialising the Kissenger and turning it into an actual product was put in motion in 2012. The main challenges we had to overcome were:
Difficulties in raising funds: We are based in Singapore, and raising funds for such a project is extremely difficult. Although we received a government grant, actually accessing those funds was an insanely bureaucratic process which took us back months
Software Development: There are ten start-ups popping up every minute, and large companies are paying big bucks for talent. That, combined with the fact that the Kissenger software was something never done before made it very difficult to find a good software developer. We had to go through four developers and this process took almost two years.
Hardware development: Even though some prototypes were developed, we had to spend lots of time and effort on improvement. Our current product looks and functions very different from initial prototypes. We also had to do several user tests, modifications and changes over the past years.
Personal Reasons forced the project to be shelved for a while.

The first version of the Kissenger looked rather cute, with eyes and ears, while the latest version has a more neutral / abstract look. What are the challenges in regards to the design for your product? Why did you settle for the version we can see today?
Dinos Andreou: We wanted to avoid the “cute animal” look because we don’t want the Kissenger to be perceived as a toy. It’s meant to transfer a kiss, and bring more intimacy to a long distance relationship so we went for a more neutral, sleek design, rather than an over-sized Tamagotchi.
Furthermore, the current design allows for customisation (i.e. personalising the shell, the visor could be removed to allow for space for a webcam, etc.) which are options we wish to offer all the buyers in the future.
We organised a contest in 2012, inviting a number of designers to present their ideas, and held a vote to choose the basic design. The current design won with almost 65% of the votes.

Let’s talk about the technical aspects: how does the Kissenger manage to emulate a real kiss?
Dinos Andreou: There are thousands of ways someone can send a kiss, and having a device able to replicate all of them would mean restructuring a complete artificial mouth, lips and tongue. Something like that would be extremely expensive to make with current technology and it would be a strange product on stand-alone basis as well as kind of creepy. We needed to focus on the simplest and most commonly used kiss, the simple smooch, and find a way of making the lips move in a realistic and acceptable way considering the limitations, and get the product to the market as quickly as possible. We believe that fast improvements and innovations can only take place if something is out in the market, and not stuck for years in an academic lab.
Kissenger is achieving this with a combination of a pressure sensor (sensing the strength of the kiss), and servo motors which cause the lips to move in variable degrees depending on the strength of the kiss received.
The system is designed to send and receive the signal simultaneously, as if it was a real kiss between two people.

Could it be used for other purposes as well, for example to emulate lip movement of somebody I talk to through a webcam? Did you come up with other uses during your development?
Dinos Andreou: We are already researching much more advanced ways of transferring motion over the net and as a matter of fact, yes, we are experimenting with using a camera as an input device. We already have a prototype mini-surrogate which is doing just that.
For the Kissenger specifically, we believe its future evolutions will include much more detailed lip movement, but the method of input will always be touch and pressure.

Why did you choose to make this concept into a marketable product?
Dinos Andreou: Good question. The Kissenger team has a number of prototypes and ideas, all based the notion of transferring the sense of touch and pressure over the net. However, we believe that rather than continuing to do research on all of these in an academic lab, the development would be much faster if there was a profitable, active company behind it.
With that in mind, and the huge amount of publicity that the Kissenger received back in 2011-2012, we saw that it was the perfect option to be our first product to hit the market.

Which customer group do you have in mind for the Kissenger? Is it only couples in long distance relationships?
Dinos Andreou: Far from it. Although long distance couples are the main customer group, they are not the only ones which exchange kisses.
Even couples who live in the same city but not in the same house would benefit from that. Sending a kiss goodnight through the Kissenger would be a much better option than an “xxx” text message.
We are also targeting families where one child is abroad studying, or where the mother/father spends a lot of time at work away from their baby.

How did your test subjects react to kissing a machine? Isn’t that a bit awkward?
Dinos Andreou: You would think that, but you need to take into consideration the overall experience. Our test subjects did not feel they were kissing a machine, more like an extension of their loved one on the other side of the screen. It’s the same as calling a loved one you haven’t heard in years. You’re feeling their voice, not the phone.
Of course every first attempt was met with giggles from every test subject since it’s not a real kiss, but we think that adds to the appeal and the playfulness of the Kissenger, without being a toy.
Our test results are reviewed and published at high prestigious international conferences and in journals which verifies that the user studies are also scientifically correct.

What will be the next steps in the development of the Kissenger? When do you plan to start shipping?
Dinos Andreou: We are currently in discussions with investors to raise funds for manufacturing as well as preparing a crowdfunding campaign, which we aim to launch in August We expect to ship the first Kissengers by end of this year, before Christmas

In your opinion, what will be the next step in the development of haptic communication via the internet? Which trends should we look out for?
Dinos Andreou: We are strong believer that haptic communication is a definite part of our future.
We think that more and more motor and pressure related technologies will become more and more prevalent, giving a true sense of impact and pressure, unlike the electric pulses which are popular now.

Is you company planning to continue development in this field?
Dinos Andreou: Most definitely yes. The Kissenger is our first product, a baby step into becoming an independent company. We will not rest until we are able to create a full on surrogate which could transfer every single sense from across the globe. The uses and the good something like that can bring to mankind are endless.