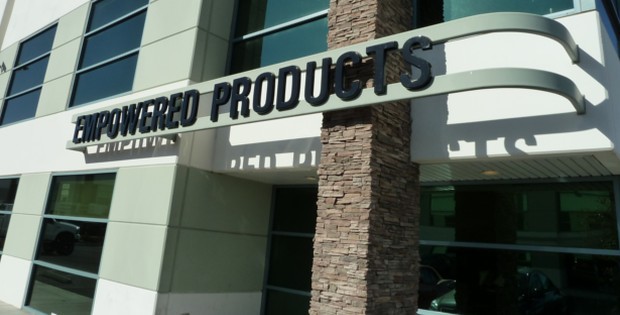 What could be more masculine than the military? Consequently, Empowered Products’ first lubricant, “Gun Oil”, hit the market like a bomb when it was launched ten years ago. The US American company quickly won over a large and devoted buyership, particularly among male consumers. Later, Empowered Products followed up their flagship brand with a collection of lubricants aiming at a female clientele, named Pink. And now, the company is ready to conquer the European market. In our EAN interview, Mark Olson, Vice President of Worldwide Sales and Marketing, outlines the strategy that will make this endeavour a success.

Empowered Products is the company behind the brand Pink and Gun Oil. Could you first give us a general insight into your business? Since when are you on the market and how did you develop over the years?

Mark Olson: Empowered Products was founded in 2003 by Scott Fraser, a U.S. Marine. The company was originally based in West Hollywood, California, a popular gay neighbourhood in Los Angeles, and Gun Oil was marketed with a military theme to gay men where it became wildly successful. A year later, he created and launched the PINK brand for women. Our focus with both brands has been an emphasis on very high quality ingredients and focusing on a core set of products for specific market segments and channels.

Your brand Pink targets a female demographic. What makes its lubes special and which products are sold under the brand?

Mark Olson: We sell five types of lubricants for women, plus a toy cleanser. Our PINK line includes silicone-based, water-based, warming, crème and gel formulations. Our pure-water based PINK Water is our most popular product. Our Hot PINK formula uses a person’s body heat and the friction of lovemaking to create a gentle, long-lasting warmth, which is a different approach than competing products that create heat with chemical reactions, additives or oils.

Gun Oil stands out on the lube market thanks to its military aesthetics. Who do you address with the brand’s products? Is there a lube that you are especially proud of and that stands out?

Is there an aspect or and principle that is the most important for Empowered Products, when a new product is developed?

Mark Olson: We all are enthusiastic users of our own products, and we recommend them our friends and family, so new product development for us is a very personal matter. We may be the only manufacturer that develops and markets lubricants separately for men and women.

You received the CE mark for your products in February. That means, that you are allowed to distribute your products throughout Europe via various channels. Why did you decide to take this step and expand into the EU?

Mark Olson: We had been selling into the European market for some time, but to expand into mass market channels and grow faster in the adult trade, we needed the CE Mark. It is an important credential and we are committed as a company to ensuring the highest standards in our products and our business practices. The European market offers extraordinary opportunities and we look forward to building partnerships with like-minded distributors and retailers.

Where are your products sold right now in Europe? To whom can interested retailers turn, if they want to pick up your products for their stores?

Mark Olson: We are available through major distributors and retailers in the UK and the EU. Anyone interested in carrying our products is invited to contact Martijn Post Uiterweer, Empowered Products – European Sales, in the Netherlands, martijn@empoweredproducts.com; +31 6 417 221 80.

In the eye of the consumer lubes can seem to resemble one another and the amount of different products can be overwhelming. What makes good marketing in opinion, that lets the user pick your brand over a competitor, or is offering the best quality enough?

Mark Olson: You are so right! But that’s true with condoms, shampoo and toothpaste, too. If top quality was enough, we’d be a household name across the EU already. We often say that if we can get someone to try our lubricants just once, that we will have a customer for life. I think a lot of marketing is still word of mouth or the experience of being introduced to it with one partner that you carry forward to a new partner. Lubricant companies don’t do a lot of print or television advertising because of restrictions on when and where the ads can appear, and also because it is quite expensive. Social media is the platform to reach consumers, and you have to have lots of very creative content.

You have run an advertisement for Pink lube on American television not too long ago. How was your experience with this type of advertising? Will we see Pink or Gun Oil ads in Europe as well?

Mark Olson: We created a Valentine’s Day television commercial (www.gunoil.com) for our Gun Oil product that aired in 2014 in several markets in the US, but really went viral on the Internet. This year we debuted a video for PINK, but not tied to Valentine’s Day. We use both in our social media campaigns and make them available to retailers to use online or in stores. I think it is very likely both commercials will be seen in Europe, but on the Internet, not on television.

Will you try to expand your network in Europe over the next months?

Mark Olson: Yes, and that effort is well under way already.

Can we expect new products from Empowered Products in the near future? Maybe even something not lube-related?

Mark Olson: Yes and Yes. We have a new lubricant brand in development, and new packaging for some of our existing brands. And before the end of the year, we plan to launch a line of topical lotions designed for intimate massage and spiritual and physical healing based on Ayurveda, the science of life.