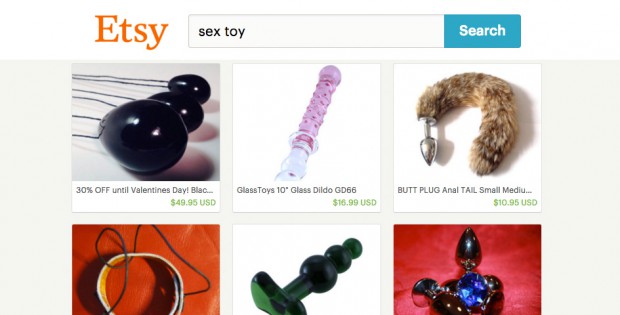 If you enter the search term “sex toy” on Amazon.com, you will find 52,000 results. On Ebay, it’s still 22,000 hits. Both platforms are known for offering pretty much anything, from washing machines to books to toilet paper. Etsy is also a shopping platform, but has a significantly smaller product range – which is no accident. As a matter of fact, it is the whole point. Based in New York and founded ten years ago, Etsy is a platform for handmade products, kind of a counter movement to the mass market. And if you search for sex toys here, you still get 4,300 results.

Etsy is much more than the platform for bored housewives it has been mocked as, and that became abundantly clear last spring when the company went public and was weighed in at 1.8 billion dollars. Roughly 1.4 million sellers and more than 50 million members – 20 million of whom are active buyers – frequent this marketplace (for comparison: Amazon had roughly 270 million customers in 2014).

The story of Rickard Andersson is exemplary for many of the active sellers on the site: In 2013, he opened his own shop “Silvarus” on the platform, selling hand-made wooden dildos. “For me, it was a way to reach out to potential customers for what was just a past time thing at the time, something I enjoyed making. I’d had a few items ordered from people that knew what I was doing. Me opening my Etsy store was a way to see if I might have a chance getting my products out on the market. I never knew, or expected it would work as well as it has.“

Having a product she felt had potential was also the first step for Maria and her shop “Kinky but Cute”. As she points out, being on a platform such as Etsy is much easier and more manageable than running your own online shop: “I find it really helpful to have a basic structure to follow, as well as having the support of other sellers on the Etsy forums. All this means I can spend more time making my floggers.“

She has been selling said hand-made floggers since the middle of last year. Her products are made from hemp or cotton fibres and really stick out from the rest of floggers on the market due to their bright colours. “I think my products’ combination of fun, experimentation, and good craftsmanship makes them perfect for a site like Etsy, since the customers there are often looking for unique and unusual items.“

Etsy as a springboard

Etsy has only been a springboard for his company, because today, he is also selling his products on various other platforms and on his own website. That brings us to the biggest downside of Etsy: Many sellers feel that you can’t really make big profits on the site, and its roots as a site for fiddlers and tinkerers who want to make a few bucks on the side still shines through pretty clearly.

How big can you get?

On the other hand, this little-guy image is also what sets this marketplace apart from most other shopping platforms on the internet, and it’s what draws many people to the site. Consequently, one of the biggest discussions within the Etsy community was caused when the company decided to go public and people were debating if and how many industrially manufactured products had already found their way onto the site and whether or not they should be allowed on Etsy. Only the future will tell if the company will give in to the expectations of investors and allow more such products on the platform.

So, from an entrepreneurial point of view, Etsy can clearly be reviewed as a testing ground where you can experiment, see if there is a market for your product, and maybe get a foot in the door. “I think Etsy, and other similar platforms, can be used to start a business. Any business certainly needs to grow out of that position to be lucrative enough, but as a start, as a test to see what works or not, it is not a bad system“, says Richard Andersson.

Maria also hopes to branch out into other channels of distribution before long: “For me personally, Etsy has been great for testing the water and finding that I have a viable product. The low set up costs and fees mean that yes, anyone can start a shop, whether it’s with great ambitions or as a hobby on the side, and I think that is part of why Etsy has such a fun mix of products.“

What do the users expect?

Before a do-it-yourselfer or a small company become successful enough so they can safely take the next step and create their own online presence, with all the financial investments that go along with that, their products have to sell. Which brings us to another question: What do the users expect from the products offered on Etsy. ”The Etsy customer seeks a more refined custom and unique product to better satisfy their discerning taste. To better satisfy our customers’ needs, we will soon be offering PLA products that are safe in high temperature and will be safe when put into a dishwasher“, says Elliott Parker, describing LeLuve’s approach.

Maria also feels that the unique nature of the products is one of the most important criteria for the platform’s buyers: “I think my Etsy customers are looking for sex toys that match their personality, as opposed to more mass-produced toys from larger companies. I try and give good value for money, which I find is well appreciated, and the fact that my floggers are vegan-friendly goes down well on the site, too.“ As Richard Anderson adds, it is okay if some prices are bigger than what you’d pay for a similar product in the mass market because the customers know that they buy unique objects. “When it comes to prize, I definitely believe that the customers know that what they are getting is something that has taken skill, time, and a lot of effort to produce and is therefore quite a bit more pricey than something coming off a production line.“

Companies have to outgrow the platform

However, he continues, anybody who is not just interested in making a little money on the side, but actually wants to use Etsy to start something bigger should not limit themselves to the portal in the long run. “Have in mind that although it is a start, and can bring you plenty of orders, eventually I recommend sellers to venture outside the frames of a system like Etsy to reach a wider client base. That might however change with further developments on the Etsy platform.“