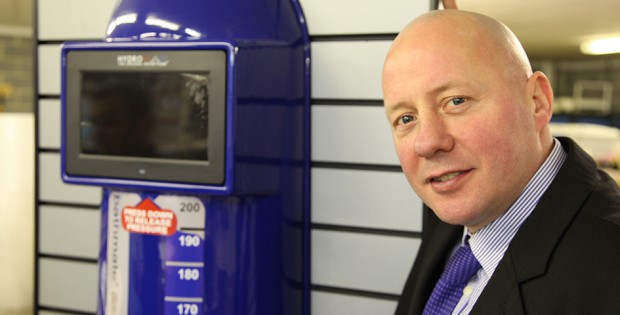 People go to great lengths and invest a lot of time to stay in shape and healthy. However, men might also want to take an extra step and prevent an unwanted side effect of physical exercise, so-called sports shrinkage. John Oakes, the inventor of Bathmate, told us more about this topic.

John, you are an enthusiastic motorcyclist, and you are very interested in things such as fitness, health, etc. When did you first stumble upon the concept of ‘sports shrinkage’?
John Oakes: I have been riding motorcycles from the age 12 and still do today at least twice a week. At age 21, I would often train at the local karate club in Wakefield on a Friday teatime, then get a shower at the club and head off into town. Wakefield was a very busy city with a great night life.

Being a single man with lots of energy left for the night, there was just one little issue that I had and it always happened after a training session. My most prized possession was always far smaller than normal and this was not a good thing on a Friday night out. I called it sports shrinkage and started to work out the complexity of what was needed to stop this from happening.

How would you describe ‘sports shrinkage’ to someone who’s never heard the term?
Sports shrinkage is where the scrotum retracts and the penis shrinks to get out of the way of physical exercise.

Does ‘sports shrinkage’ only affect people who do lots of sports and exercise on a regular basis, or does it also have an impact on people who only exercise now and then?
Sports shrinkage is the body’s natural safety mechanism, so it affects everyone who exercises, whether regularly or not.

Did this knowledge of ‘sports shrinkage’ influence the development of the Bathmate penis pump, and will it influence the development of future products?
Most definitely, the idea of having a smaller penis after a training session set the thought wheels in motion, there was no way that I was going to stop training or keeping fit so I had to come up with a solution. I was working as an engineer making special purpose machinery, this involved a client basically contacting our company and showing a problem they had or a product they needed to be automated in its assembly and we would automate the process.

So finding a solution to the sports shrinkage issue should be surely possible. The secret to the solution was finding something that would work after I’d been training that could be used while I showered that was discreet and practical… I looked around at the current penis pumps but found nothing of substance that would work like I needed it to. Most all either were large powerful hand gripper type vacuum pumps which would connect via a hose to the end or poor quality low pressure hand ball pumps that would fall to pieces when I tried to use them in water.

The sealing end of the pumps also worried me greatly, most had small rubber membranes that would seal on the penis shaft often, riding up a few inches from the penis base. The full circular ridged end profile would often cause excessive pressure and pain to around my testicle area.

I had some friends in the medical sector and contacted one over the issue of sealing the penis around the length and compressing the testicles. Their reply was not one I had hoped for. I then decided that I would have to make my own version of a vacuum pump but one that was designed to be used in water, one that would give full negative pressure around the whole area of the base of the penis and that allowed minimum contact force to the testicles area.

One that had to be comfortable to use without pipes and pumps hanging off the end which counteracted the vacuum suction. I could say that day the Bathmate Hydropump concept was born.

How can people learn more about ‘sports shrinkage’?
Speak to Tim, Bathmate’s Brand Manager, on that one. He’s amazing at putting the most unusual topics in to the simplest of terms that can be easily understood by the most normal of people.

Can your products help counter ‘sports shrinkage’?
The Bathmates success is down to the simple fact that it can be used each and every day in your normal wash routine, simply get in the bath or shower and while you are bathing you can counter the sports shrinkage and daily shrinkage that affect your penis while being out training or during a strenuous day’s work.

How exactly does it work? Would you mind describing the process?
In a nut shell, you first fill the Bathmate with warm water in either the bath or shower, then insert your penis inside the vessel and pump, the exact amount of water removed from the vessel has to be replaced by something and because the penis is inside the vessel its replaced by the expansion of the penis, you continue to pump until the penis has fully expanded, at that point you have drawn fresh oxygenated blood into the penis, reversing the negative effects of sports shrinkage

Doesn’t this mean that the fitness community is the perfect target group for Bathmate? How can our readers from the retail trade create awareness for this topic and how can they benefit from it?
Yes, that’s right, we are now working on new ways to get the message across to a mainstream ordinance, more news on this will follow shortly

Many people want to be fit and healthy, be in great shape, have a great body, etc. Why has the penis never really factored into that thinking until now?
I think all things of sexual nature have been taboo until the last 10 years or so, talking to anyone about a penis, or penis pump, would never had happened. As society has become more relaxed, real male health issues can now be addressed. After all, most men would agree to be a man you need a healthy and fully operational penis. Using a Bathmate virtually guarantees your penis will be healthy and work properly in the bedroom